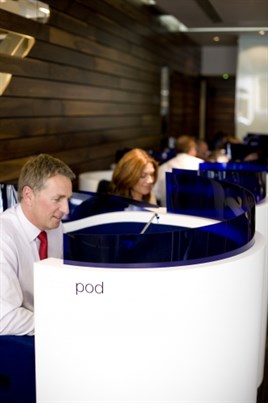 Business travellers and mobile workers are putting business privacy at risk when out of the office, according to the latest research by Regus.

Although increasing numbers of people try to catch up on work while on public transport, nearly 70% of respondents pinpointed trains as the number one danger zone for exposing sensitive information.

Cafés (cited by 56%) and hotel bars and lounges (55%) were also identified as high-risk hot spots, followed by aeroplanes (30%).

When asked exactly how confidential information was likely to be exposed, three-quarters of respondents reported that people overhearing mobile phone conversations was the most likely scenario.

Confidential printed documents in peoples’ hands or laps, as well as open laptops were also identified as easy targets for snoopers by more than half of respondents. Only a fifth felt that their smartphone posed a risk.

Commenting on the findings, Steve Purdy, UK managing director at Regus said:  “Privacy remains a huge concern for workers on their daily commute, and also for the thousands of mobile workers who call into cafés during their working day.

“Increasingly, they are seeking a professional alternative to working in public places.”