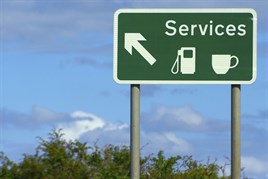 Motorists say they are being ‘held to ransom’ when filling up at motorway service stations and want prices to be capped.

Fuel at motorway services can be up to 10p per litre more than the national average price of petrol and diesel, which is reflected in the findings of the RAC’s research as three quarters of motorists (74%) feel the price of motorway fuel is ‘very expensive’ and one in four (26%) drivers refuse to buy petrol or diesel at services as a result.

The RAC is calling for urgent action to be taken to address motorway petrol and diesel pricing, either by motorway services’ fuel retailers themselves or at a government level.

Almost two thirds (63%) surveyed by the RAC said prices should be capped so fuel is no more expensive than non-motorway forecourts. More than a quarter (27%) would be happy with fuel being capped at just a few pence over the non-motorway price, and only 10% believe nothing needs to be done.

Almost half (44%) of the 1,463 motorists in the RAC Opinion Panel survey, say they only buy fuel at motorway services when they have no other choice, because they feel like they are being held to ransom over the price.

There is also real concern about drivers risking their fuel tanks running dry rather than filling up at motorway services, posing a real danger on the nation’s fastest roads. In fact, one in five (19%) admits to putting in ‘just enough fuel to get by’ at a motorway services to then find a cheaper alternative later.

The RAC, which deals with around 22,000 incidents of running out of fuel each year, says it is unacceptable that motorists should have to pay a premium on motorways.

RAC fuel spokesman Simon Williams said: “It’s no wonder that motorists feel held to ransom with prices on the motorways inflated to such an extent. In some cases motorway petrol and diesel might even be 15p dearer than the cheapest forecourts which would add as much as £8 to the price of a tank of an average family-sized vehicle.

“We can see no reason why motorway fuel should be so much more expensive. In fact, arguably it is much easier from a delivery point of view than it is getting fuel to urban filling stations. Questions need to be asked to find out what reasons motorway service operators have for charging such increased prices.

“We do, of course, have plenty of good news about forecourt prices at the moment as fuel has come down significantly in recent weeks and we are currently at levels not seen since 2010, but motorway service stations still remain much more expensive.

“Our research actually shows that almost a third of drivers would come off the motorway and add another 10 miles to their journey to find cheaper fuel. There is also a real concern that some motorists may decide to risk getting home with what they have left in the tank, rather than fill up at an expensive service station, and potentially run out of fuel. That presents a real danger, both to that driver and other road users.

“We’re calling for motorway fuel retailers to be more reasonable with their pricing. In fact, a quarter (24%) of the drivers we surveyed would accept paying 2p extra at motorway services, but not an extra 10p.”

Some 76% of motorists surveyed say service stations should display the price of their fuel well before the exit so they know how much it costs before leaving the motorway. In May 2013, as part of a review into motorway fuel prices, Prime Minister David Cameron said motorway services could be forced to advertise their fuel prices in advance, but to date there has been no obvious progress in making these changes, nor has there been an update on tackling high motorway fuel prices.

Mr Williams added: “We feel it’s only fair that the motorist is able to make a choice about how much they want to pay for fuel before coming off at the exit and having to accept whatever they are presented with. It’s not like anybody has a choice about whether they put fuel in the car or not, but they should not have to experience this 21st century form of highway robbery.

“We hope that the Government takes action – preferably within this parliament – to make the much-needed change to motorway signage as well as addressing the bigger issue of pricing to make it more affordable for millions of motorists to fill up at motorway services.”