Fleet at heart of Jaguar's plans for XE 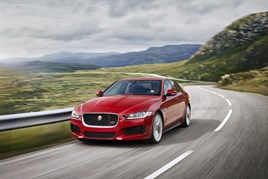 Jaguar is all set to be transformed by the arrival of the most important new model it has ever built.

The Coventry manufacturer says it is ready for the avalanche of orders it expects for the XE – and is convinced that the fleet industry is also lined up to play its part in making the car a success against BMW's omnipotent 3 Series.

“Everyone here is all too aware of the huge impact this car is likely to have on our business and we've spent the last two years paving the way for a model that has been developed specifically to compete with its target.

“We know it will tick all the boxes with the growing number of discerning corporate buyers who invest in brand values and want products that look good, are good to drive and offer top value.

“With 99g/km emissions and the potential to achieve more than 70mpg, our car delivers the P11D and residual figures that will allow us to offer really good monthly payment propositions,” Jaguar managing director Jeremy Hicks told Fleet News.

Speaking as the XE made its debut at the Paris Motor Show, Hicks said he wanted the model to compete in all market segments but singled out contract hire and leasing as the critical area for exploitation.

“We produced 80,000 vehicles last year and I'm not going to talk about the volumes we're anticipating in future, except to say that I think endless possibilities are now opening up to us as far as future products go.

“We've already demonstrated that we can deliver growth – we've achieved consistent double-digit growth and we're doing it profitably – and nothing is being ruled out of our plans for the future.

“However, the most important thing now is for us to concentrate on the opportunities that are presented to us by this car. At least 60 per cent of our XE business will be to fleet and we've planned it to the nth degree in terms of what we expect it to deliver.

“Our aim is to compete in all the segments with the target of achieving fair and reasonable shares in each sector. Daily rental is also important and forms part of the plan, but we're going to be sensible with this – we have no intention of overloading any one channel over another because all that does is store up problems for the future,” he said.

Hicks revealed that key fleet customers were a key part of clinic sessions early in the XE development programme and talks began more than 12 months ago with leading contract hire and leasing firms.

“As a result, we believe we have a compelling proposition and the foundation work that has been put in place with the sales network has left us feeling very positive – our 30 fleet and business specialist dealers all have specific managers and will offer extra demonstrators,” he said.