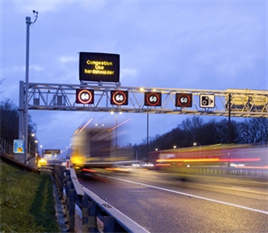 Foreign drivers have escaped 23,295 speeding offences since January 2013 – the equivalent of £2.3 million worth of speeding tickets - according to the Institute of Advanced Motorists (IAM).

The figures were revealed following a freedom of information request to police authorities, which asked how many overseas motorists had been caught by speed cameras across England and Wales.

As foreign vehicles are not registered with the DVLA these speeding offences are not pursued.

The highest number of speeding offences registered by foreign vehicles were:

• Thames Valley, with a reported 3,580 offences and the highest speed recording of 102mph in a 70mph zone

• Merseyside, with a reported 2,477 offences and the highest speed recording of 87mph in a 70mph zone

• Warwickshire, with a reported 2,152 offences – no highest speed recorded

• Gwent, with a reported 2,090 offences and the highest speed recording of 99mph in a 70mph zone

The Metropolitan Police that covers 32 London boroughs followed in at sixth position with a recorded number of 1,586 offences taking place across the Greater London area, with a high speed recording of 98mph on the A406 North Circular Road, southbound – a 50mph zone.

The top recorded speeds came in from:

• Thames Valley, leading to Aston Clinton with the highest speed of 102mph in a 70mph zone

IAM’s director of policy and research, Neil Greig said: “The high numbers of oversees speeders on our roads show how important it is that the UK joins up with the rest of Europe to harmonise motoring offences and give the police extra powers to pursue dangerous drivers.

"Progress on this issue has been very slow and in the meantime thousands of drivers are avoiding fines and bans simply because their cars cannot be easily traced.”

Fleet Poll
Was it a good Budget for the fleet industry?
Vote
View all
77