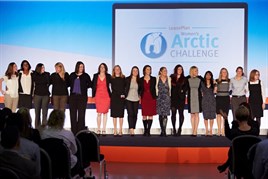 LeasePlan has announced that it will send a dozen of its female employees on a once-in-a-lifetime Arctic expedition in April 2015.

The LeasePlan Women’s Arctic Challenge will see an all-female team make a 100 kilometre ski-trek across Baffin Island in the Arctic Circle.

The eighteen-day trip, expected to take place in temperatures of around -20C, will be led by professional adventurer, gender equality advocate and co-chair of the Women’s Business Networks Forum, Debra Searle MVO MBE.

The Women’s Arctic Challenge is part of LeasePlan’s ongoing programme to put the career development of women at the forefront of the company’s commercial agenda.

The project also hopes to raise awareness and challenge unconscious gender bias within the company as well as across the industry.

With over 550 UK employees of whom about 53% are women, LeasePlan has an Investors in People GOLD rating.

Its Diversity Programme was launched earlier in the year with every employee taking part in workshops about the benefits of a diverse workforce to an organisation and its employees. Issues discussed and debated included how to:

Testament to the company’s meritocratic culture is the recent appointment of two senior women to the LeasePlan UK board – Jo Elms as commercial director and Lesley Slater as business development director who have both worked for LeasePlan for 9 years and 20 years respectively.

Steve Moss, director of HR who has driven the initiative, explained: “It is clear that the financial services and motor industries lack female voices in boardrooms yet studies have shown that companies with female board members pay more attention to risk and are more financially successful.

“The LeasePlan Women’s Arctic Challenge sets the tone by giving twelve of our female employees an inspiring experience that we sincerely believe will enhance their lives, both personally and professionally.”

Searle said: “Tapping in to the research on gender equality it is clear that women’s lack of confidence can be a major hindrance to progression.

“For many of the 87 women who applied, putting themselves forward for selection was, in itself, a huge challenge and they have gained self-awareness along the way.

“The LeasePlan Women’s Arctic Challenge is an opportunity for 12 ordinary women to do something truly extraordinary.

“The team will be forced to push itself to the limit, both physically and mentally and I have no doubt that they will return more confident and courageous as a result.”

Every female employee at LeasePlan was eligible to apply for the Arctic Challenge, and the final team announced at October at the Company’s Annual Employee Conference include: