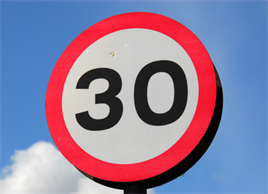 Every day, 64 people are killed or seriously injured on Britain’s roads, with more than a quarter of all collisions involving somebody driving for work.

However, the risk of death and serious injury can be greater or lower depending on the stretch of road being travelled.

For example, the risk of death and serious injury is two-thirds higher on the major roads of the East Midlands than it is in the West Midlands.

The results, from the Road Safety Foundation report How safe are you on Britain’s roads?, show that the West Midlands and Scotland are the two regions showing the quickest improvement in terms of cutting road incidents.

Across all regions, the average risk rating has fallen from 33 to 27 fatal and serious crashes per billion vehicle kilometres travelled. 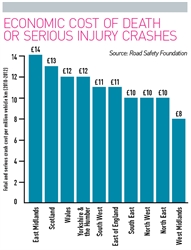 The East Midlands, Wales, Scotland, Yorkshire & the Humber and the South East all showed higher than average risk, while the West Midlands, North East, North West, South West and the East of England were lower than the average.

The differences in each region are mainly due to the differing proportions of travel on safe roads and risky roads.

An average single carriageway ‘A’ road is seven times riskier than a motorway, while some roads represent more than 20 times the risk of others.

James Bradford, engineering manager at the Road Safety Foundation, said: “The busier the road, the more frequently any flaw in layout leads to death and serious injury.”

Half of the cost of all fatal crashes on the British road network occurs on the 10% of roads surveyed and mapped in the foundation’s report.

Britain’s riskiest road is a stretch of less than 12 miles in West Sussex, the A285 between Chichester and Petworth. 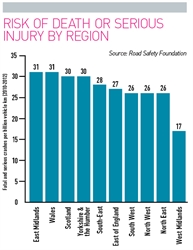 The most improved road is the A404 between High Wycombe and Great Missenden in Buckinghamshire. The improvement followed a speed limit review in the county  that cut two short sections, of one mile and half a mile, through Amersham from 40mph to 30mph.

However, Bradford said improvements in safety often came from simple things such as maintenance.

“Authorities commonly report that many of the most effective improvements have not been carried out to specifically improve road safety.

“Often the pressing need to carry out very basic maintenance has initiated action and the additional safety enhancements were a later addition.”

Fatal and serious crashes have been reduced by 80% on 15 stretches of UK roads, which saw 237 people killed and seriously injured in the three years before action was taken but 52 after. The annual economic saving of these changes was £25 million or £110,000 per kilometre.