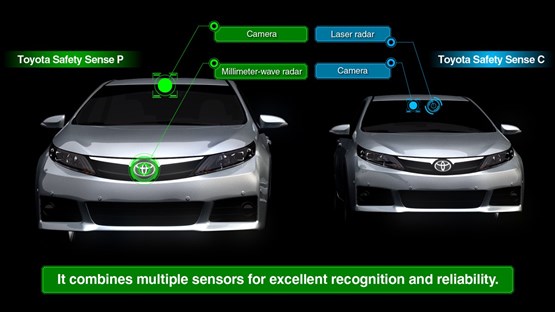 Toyota has revealed some of the new technologies and systems it will be featuring in future models to make driving safer.

The new features, announced at a safety seminar in Toyota City, will be rolled out in new models from 2015. Toyota is also creating Safety Sense active safety packages, tailored to suit different size vehicles that will be made available worldwide by the end of 2017.

Toyota has worked to eliminate the risk with new vehicle-to-infrastructure and vehicle-to-vehicle communications, using a wireless frequency reserved for ITS – Integrated Traffic System – services.

For example, when you arrive at junction with no clear view, sensors above the road will detect on-coming traffic or pedestrians crossing the road and send the information to your car – the vehicle-to-infrastructure system.

Vehicles approaching the intersection will signal their presence using the vehicle-to-vehicle link, activating visual and audio driver warnings when necessary to help prevent an accident.

Toyota has also developed a new Communicating Radar Cruise Control that uses vehicle-to-vehicle communication to make it easier for preceding and following vehicles to keep a safe distance apart.  It uses a forward-facing millimetre-wave radar to monitor the distance between your vehicle and the one ahead, their relative speed and the acceleration/deceleration of the car in front. This significantly improves tracking performance in traffic, being safer and more fuel-efficient, and helping avoid one of the common causes of congestion.

Toyota develops its ITS-compatible systems working in collaboration with government bodies, agencies and private companies, with the aim of launching them as soon as practically possible. In 2013, Toyota participated in the ITS Green Safety public-private collaborative demonstration project to assess the social effects of such systems. It will also be participating in the ITS Connect Promotion Consortium to support the development of environments for the smooth introduction of such systems and their widespread adoption.

Toyota's LED Array Adaptive High Beam system uses multiple, independently controlled LEDs arranged in a single row. This gives a wider illumination without dazzling drivers of on-coming or preceding vehicles. It can light up the gaps between vehicles ahead and those approaching, making it easier to spot pedestrians; light distribution is also linked to use of the steering wheel, giving better visibility as you turn into a bend.

Toyota’s development of next-generation illumination technologies is part of the company’s efforts to help prevent accidents at night. The new Toyota Safety Sense active safety package will include an automatic high beam function.

From 2015, Toyota will launch a new set of active safety technologies design to help prevent or mitigate collisions across a wide range of vehicle speeds. They will be offered in two Toyota Safety Sense packages, initially in Japan and subsequently in the USA and Europe, by the end of 2017.

The two packages – designated C and P for mid-size and larger vehicles respectively – bring together several of Toyota’s existing active safety technologies, including the Pre-Crash Safety system, Lane Keep Assist and automatic high beam. The C package uses a laser radar and the P package a millimetre-wave radar, each combined with a camera to secure high performance and reliability.

A separate active safety package, Lexus Safety System+, will be marketed for Lexus models, including a new Road Sign Assist function. This recognises speed limits and road signs when travelling overseas, presenting the information on the driver’s instrument display.