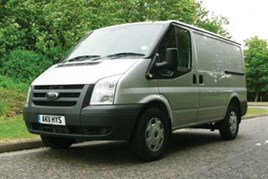 Ford has dominated the FN50's annual vans reliability survey with the Transit taking the top spot for vehicles and the manufacturer heading the list of manufacturers.

Unlike car reliability, where downtime can often be accommodated by rescheduling meetings or relying on telephone or video conferencing, van reliability if usually business critical.

Vans are usually on the road because there are performing some essential duty, such as delivery of goods or services, with another business relying on them.

The survey responses cover a light commercial vehicle park of more than 180,000, making the FN50 survey the largest of its kind.

The Ford Transit, which was recently replaced by a new model, which went on sale this summer, retained its position as number one.

The Volkswagen Transporter, which is now entering its final year of production in the current generation, climbed two places compared with the 2013 survey to take second place.

The positions of the Transit and Transporter are mirrored in the manufacturer table with Volkswagen finishing as runner up to Ford.

The Ford Transit Connect held on to the third place achieved in 2013, while the Mercedes-Benz Vito which is now on run-out before a new model arrived in the UK in spring 2015, takes fourth position – two higher than it achieved 12 months ago.

The Volkswagen Caddy remains in fifth place as the current model also approaches the end of its lifecycle.

The Citroën Berlingo returns to the top 10 for reliability, taking sixth place. The Mercedes-Benz Sprinter has fallen five places compared with last year’s survey, which could be an indication that some of the class-leading technology introduced on the model in 2013 could have made the van slightly more prone to faults than its predecessor.

The Sprinter knocks the Vauxhall Vivaro down to eighth place from the seventh position it achieved in 2013.

The Ford Transit Custom enters the top 10 for the first time following its launch in summer 2013, while the Toyota Hilux pick-up truck takes the final position in the top 10.

Little has changed in the top half of the table of most reliable van manufacturers. Behind Ford and Volkswagen, Mercedes-Benz retains the third position it achieved in the 2013 survey, while Vauxhall stays in fourth position.

Fifth place goes to Citroën, which has climbed three places from its ranking 12 months ago, and perhaps backs up the Berlingo’s entry in the individual van’s top 10.

Both Peugeot and Nissan hold station in this year’s survey, taking sixth and seventh places respectively, while Renault has fallen from fifth in 2013 to eighth place this year.

Toyota doesn’t offer a wide range of commercial vehicles, but it enters the top 10 for manufacturers in ninth place. The Hilux pick-up was the highest places pick-up in the individual models table, while its partnership with Peugeot-Citroën in the medium panel van sector giving it a strong competitor in the Proace ensures the brand is on the shopping list for many more fleets.

Mitsubishi, whose L200 pick-up is coming to the end of the current generation but remains popular among fleets and small businesses, takes the final position in the manufacturer’s top 10. It’s a relatively small player in the commercial vehicle sector, with LCV versions of its 4x4 cars so perhaps is punching above its weight to achieve and retain a place in the top 10.