Increased activity in the fuel card sector, together with a number of new launches this year, is seeing the spread of cards used by fleets widen, according to a new survey.

Although the sample size is lower this year – 500 fleets versus 3,500 in 2013 – the TrackCompare.co.uk poll in association with Fleet News shows that five of the eight cards with a year-on-year comparison increased their market share. This suggests a growing acceptance by fleets that a greater number of fuel card providers can offer sufficient network coverage to meet their needs.

Meanwhile, the trend for the sector’s largest supplier Allstar is downwards, although it would be dangerous to draw firm conclusions due to the smaller sample size in 2014.

While anecdotal evidence from fleets suggest that some have switched to other card providers in the past year, Allstar parent company FleetCor says it has actually increased its customer base as a result of a number of improvements made to its fuel card proposition over the past 12 months.

The fuel card sector has welcomed several new entrants since 2013, all hoping to tap into the £6.5 billion market.

It combines a fuel expenses Barclaycard with a mileage capture and audit system, developed by TMC.

Fuel+ was followed by an announcement that specialist oil trading company Portland was targeting car and van fleets with a new card that fixes diesel pump prices for a year.

The price is based on the week’s national average retail price and can be fixed for anywhere between one and 52 weeks or more.

These new offerings followed other high-profile launches in the wake of problems suffered by the market leader Allstar.

Its customers were left unable to access online data when it began switching account information to a new operating platform at the beginning of last year.

Those fleets then discovered Allstar had introduced a network service fee, potentially adding thousands of pounds to annual fuel bills.

However, the company has since enhanced its fuel card offering, including an automated software tool that calculates personal and business mileage and provides HMRC-compliant data for precise reimbursement, reporting and payment of taxes to HMRC.

Allstar has also revealed the rollout of chip and PIN, which will take two years to complete, after its parent company FleetCor announced a deal with Visa Europe last year.

One of the attractions for fleets considering switching fuel cards is the ability to fix pump prices, according to TrackCompare, a service not currently offered by Allstar.

Kjell Anderton, a director of TrackCompare.co.uk, said: “Over the past 12 months we’ve noticed many more businesses have started using cards that fix pump prices for a week, such as UK Fuels, which explains the cards’ increased market share.”

Cheaper fuel remains the biggest reason why fleets use fuel cards, although the proportion has dipped slightly. More than half of fleets (51.4%) said their fuel card was not saving them money, although that was a six percentage point improvement on last year’s survey when 57.8% of fleets said they were not saving money with a fuel card.

Anderton said: “Although more businesses say they’re saving money using fuel cards, the amount is certainly less than half of what it was a year ago.”

The average discount on the pump price was 3.36 pence per litre (ppl) in 2013; this year it was 1.5ppl, according to
the survey. Anderton added: “This could explain the reason fleets believe the main benefits of fuel cards are purchase control, less administration than with other options and single-month invoicing.”

Nearly half (47.2%) of respondents, conduct a review every six months, while 24.9% carry out an annual assessment.

Meanwhile, the proportion of businesses using fuel cards to control purchases has more than doubled over the past year to almost one in four fleets (23.6%), while the number of fleets putting improved cashflow and payment security as their major benefit both fell.

The TrackCompare.co.uk poll also found there was a nine percentage point drop to 54.6% of fleets paying annual fuel card fees.

Launched in 2009, TrackCompare.co.uk represents more than 50 tracking and telematics companies across a wide range of technologies, and compares a variety
of products. The company’s online service is backed by a team of fleet consultants, who work with more than 2,000 new fleets every month.

Anderton said there has been a rise in popularity of vehicle tracking systems which integrate with fuel cards and, as a result, help combat fraudulent card use.

“We expect interest to increase,” he added. 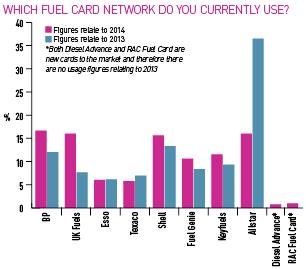 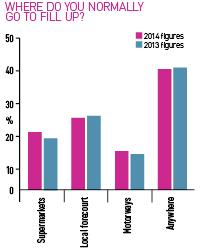 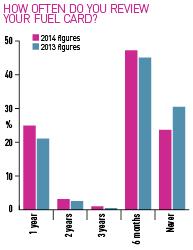 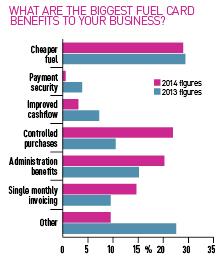 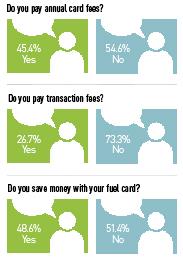