Couriers invest in fleets to cope with Christmas rush 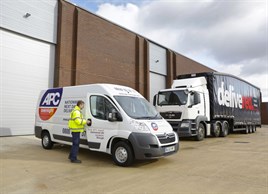 The Christmas period is the busiest time of the year for APC Overnight and Yodel.

Dick Stead, executive chairman, told Fleet News: “We are working with our clients on their forecasting and, while these are seasonal positions, many of the roles we’ve filled are expected to become permanent thanks to the increase in our client base and general growth in parcel volumes.

“Depending on the volumes we handle, that number will be a mixture of self-employed couriers who deliver in their local areas and the directly employed uniformed staff who operate liveried vans.”

The company is reducing its reliance on agency workers by employing more of its own drivers on seasonal contracts.

Asked how Yodel manages the road risk of new recruits, Stead said: “We have a standard interview template that focuses on customer and technical experience for all roles and a driver assessment that includes safety and road awareness. This also helps us understand if candidates have the technical ability to drive our vehicles.”

Yodel has introduced a range of online training modules to support the training of employed and third-party drivers, which are available as soon as a verbal offer of employment is made.

“It helps them learn about Yodel, their roles and how they support the customer experience before they handle their first parcel,” said Stead.

The training ranges from internal practices and policies to industry-standard legislative and regulatory topics such as health and safety, security and manual handling.

“In addition to giving our employees the skills they need to perform their roles, the training also ensures consistency of approach,” he said.

Formed in 2010, Yodel operates from 60 centres and is now delivering 145 million parcels each year.

After a review earlier this year, the company took delivery of Mercedes-Benz Actros tractor units, Cartwright trailers and a mixture of Vito and Sprinter vans on short-term hires or early long-term replacements. These are supplemented by a fleet of self-employed and partner drivers.

Meanwhile, another successive surge in demand has prompted APC Overnight to spend a further £6 million on equipment less than two years after it opened the doors on a £16.5m national sorting hub near the M6 motorway.

New overhead sorters have lifted hourly capacity to 20,000 parcels and the purchase of extra land means the company’s centre at Cannock, Staffordshire, is now better able to handle the 160 vehicles that arrive every night.

“Business has grown each year since we were formed in 1994,” said Mike Allison, head of transport at APC Overnight.

“We’ve taken on an additional 140 full-time staff in anticipation of an increase of up to 22% this year.

“We’re likely to get really busy from the first week in December, when our average sorting total on Mondays – our busiest day – should rise from 130,000 parcels to 185,000.”

Operating from 115 depots, APC has a total full-time workforce of more than 3,700 and has reported a 30% increase in turnover in the past two years.