A sharp reduction in used car trade values has signalled the end of an exceptionally strong run for the market during most of 2014, according to CAP Automotive.

Despite CAP sounding the warning bell on an end-of-year price-turn as far back as September and October, a sharp dip in demand and trade values during November has sent ripples of alarm through the market.

Black Book Live reveals that across the whole market the average value reduction over the past four weeks has been around £300 per car, with a sharper downward dip during week three of the month than at any other time this year.

It means the December edition of CAP’s monthly Black Book will show the biggest single fall since June 2011.

CAP will use the example of December’s ‘Book drop’ to renew calls to the motor retail market in particular to move away from artificially static monthly price tools.

The business argues that not only are users better placed to buy or sell more profitably using real-time valuations, but sudden monthly price changes cause unnecessary alarm in the market.

The 2.9% average trade value reduction over the course of November translates to an average price drop of around £300 per vehicle, measured at three years old, with 60,000 miles.

Across different vehicle sectors the average movements range from £124 for City Cars, £317 for Executive models, £263 for Lower Medium and £322 for Upper Medium to £1,840 in the Luxury Executive sector.

Convertibles may have hit their annual low point with average falls during November of £518 while 4x4s have fared better than most, reducing in value by an average of just £160.

A slowdown in the final quarter of the year is typical in the used car retail and trade sector and Black Book Live notes that this one follows a generally stronger year-to-date performance than last year.

Values up until the end of the third quarter  of 2014 had in fact fallen 2% less than over the same period in 2013; however subsequent movements now mean that the overall year has caught up with January-December 2013. 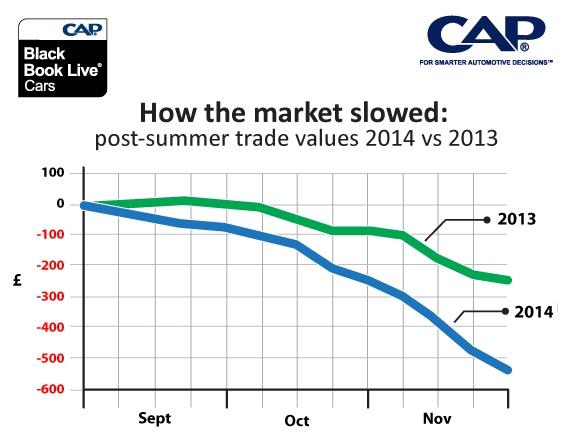 Derren Martin, senior editor of Black Book Live, said: “Despite our warnings as far back as late September that a slowdown would come, the rate at which values have fallen during November seems to have caused some alarm in the market.

“Although this realignment of values is basically a game of catch-up there is no escaping the fact that for users of static monthly trade value guides the Book drop into December is a large one – indeed the highest since the summer of 2011, over 40 months ago.

“The reasons for the drop in wholesale prices are fourfold. Firstly, supply levels have increased due to the influx of part-exchanges and fleet returns generated by September’s 10-year registration high, followed by further high registrations in October.

“Secondly, retail demand has dropped off as it tends to do in the run up to Christmas, but this year it has been more widely reported.

“Thirdly, many retail forecourts are full – the simple fact is there are more cars being advertised than there were at the same time in 2013 and little or no requirement to replenish stocks.

“Finally, used car prices are high. Depreciation year-to-date has been less pronounced than it was to this point last year and so prices are generally higher than they were 12 months ago.

“Rather than the market meltdown that some people fear, we believe it is more a case of unusually high prices ultimately proving to be unsustainable.”