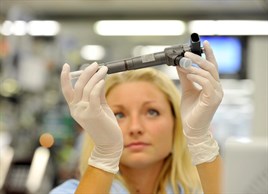 Today's diesel cars are cleaner and more efficient thanks to technological innovations by automotive suppliers, according to Bosch.

Over the past decade, the increasing number of diesel cars fitted with advanced components, such as common-rail diesel stop/start, have benefited from significantly reduced emissions and lower running costs, the firm claims.

It highlights the Society of Motor Manufacturers and Traders' New Car CO2 Report, which says new diesel cars sold in the UK are 21% less polluting and 27% more economical than they were in 2003, claiming that British motorists are saving money.

However, the research does not take account of recent studies that show real world fuel consumption figures are more distant than ever from the official figures reported by the car manufacturers.

If diesel cars were only as fuel-efficient as they were ten years ago, says Bosch, the average annual fuel bill for 12,000 miles of driving would be £1,690 rather than the £1,330 it is today - so motorists are saving up to £360 per year. In addition, modern less polluting diesel cars are reducing the UK's CO2 emissions by more than 750,000 tonnes per year.

Peter Fouquet, president of Bosch UK said: "Motorists today benefit from much cleaner diesel cars than those that were on the market even 10 years ago. As diesel car sales continue to rise, we are focused on constantly innovating new technologies that help reduce emissions from diesel cars and make them cheaper to run."