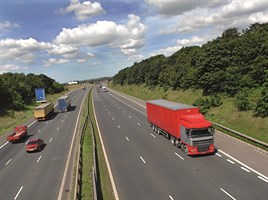 A logistics company has been prosecuted after two Margate employees were left badly injured when they were knocked nearly five metres to the ground.

One of the two suffered a broken jaw, 11 broken teeth, a fractured elbow and a broken pelvis. He is still unable to fully straighten his left arm and has needed reconstructive surgery on his jaw. The second worker gashed his leg, suffered whiplash and required ten stitches for a head wound.

The two men, who wish to remain anonymous, were working a bank holiday weekend on 5 May 2013 for CEVA Logistics Ltd at a site in Manston, Kent,. They used a truck to raise them up so they could photograph the improvements they had been working on when the machine was hit by an overhead crane and the two fell to the floor below.

The incident was investigated by the Health and Safety Executive (HSE), which prosecuted the company for safety failings at Margate Magistrates’ Court.

The court heard the two men, one 45 years-old and one 47, were part of a six-strong team tasked with painting lines on the floor of a firm’s despatch area. They had to remove all the generator sets before painting could take place, and then replace the sets.

The two injured men were taking pictures to record the results of the job when their truck was struck by the overhead crane, which was putting the last sets back into place.

HSE found CEVA Logistics Ltd had not planned the job effectively and so failed to provide its employees with a safe method of work for the job and clear supervision.

CEVA Logistics Ltd, of Excelsior Road, Ashby-de-la-Zouch, Leicestershire, was fined £10,000 and ordered to pay £1,491 in costs after admitting a breach of the Health and Safety at Work etc Act 1974.

HSE Inspector Robert Hassell, speaking after the hearing, said: “One of the two employees received life-changing injuries – the injuries to his left arm and face will always be with him. But there could have been even graver consequences of what was a preventable fall.

“CEVA Logistics should have made sure that their employees were fully aware of the safe methods to be used to carry out the job and that there was effective supervision on site. But they didn’t and two workers were badly injured as a result.

“Falls from height were the most common cause of fatalities last year, accounting for almost a third of deaths among workers. Regardless of the size and duration of tasks undertaken, it is essential companies have suitable systems of work to safeguard their employees.”