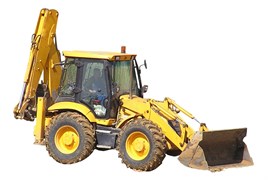 A Hampshire waste company has been fined for serious safety failings after a worker was run over by a reversing digger at a yard in Eastleigh.

Martin Jewell, 49, from Gosport, sustained life-changing injuries, including a double fracture to his right shin bone and broken bones in both feet, in the incident at Solent Waste Services Limited on 30 October 2012.

The company was prosecuted by the Health and Safety Executive (HSE) after an investigation found more could and should have done to segregate the movement of pedestrians and vehicles.

Westminster Magistrates’ Court in London heard that Mr Jewell, a skip driver, had returned to the site after completing a job to see if any more work was required.

He walked to a storage unit and asked a digger driver to pull out another skip to fill before turning to make his way to a nearby office. However, as he walked away the digger reversed into him, knocking him over and crushing his legs.

HSE found there was nothing in place at the yard to ensure vehicles and workers were kept apart, such as designated walkways or zones.

The court was told that pedestrians routinely walked and stood in areas where vehicles were circulating.

Solent Waste Services Limited, of Withy Meadows, Dutton Lane, Eastleigh, was fined £12,000 and ordered to pay £19,752 in costs after pleading guilty to breaching Sec 2(1) of the Health and Safety at Work etc Act 1974.

After the hearing, HSE Inspector Zahir Agha said: “Incidents of this kind, where vehicles strike workers because movements are not properly controlled, occur all too often in the waste sector and result in a number of deaths and serious injuries every year.

“Work around moving vehicles has to be properly planned, in line with guidance that is readily available through HSE and others.

“Solent Waste Services could and should have done more, and as a result Mr Jewell has been left with debilitating injuries from which he may never fully recover.”