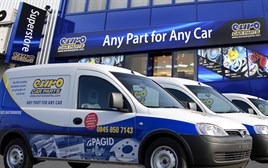 Martin Gray, CEO of Euro Car Parts, said: “We have seen a magnificent growth over the past two years  in terms of branch openings, increased OE range and additional suppliers along with additional team members at our new and existing sites, so we are delighted to continue this expansion into 2014.

During March the fast-growing company also added two stores in Scotland with the addition of 10,000 + sq ft sites in Kirkcaldy and Inverness.

The company now operates from two locations in each of Glasgow and Edinburgh, in addition to Aberdeen, Paisley, Perth, Kirkcaldy and Kilmarnock .  The expanded network allows Euro Car Parts to bring high quality, competitively priced, products to the Scottish motor trade.

The company announced that a further 10 locations have been scheduled to open in Q2.