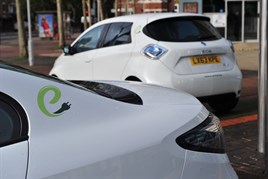 There has been a significant reduction in air pollution in recent years, but air pollution caused by road traffic is still a significant threat to public health, particularly in a number of urban areas where levels exceed those permitted under Scottish regulations and European Union law.

The Carplus Annual Survey of Car Clubs 2013/14, the most comprehensive dataset collected across the car club sector, reinforces the important role car clubs play in air quality management. It shows that approximately 850 private cars have been removed from Scotland’s roads and the purchase of 1,900 private cars has been deferred because over 7,100 people in Scotland have joined a car club. That’s a total of 2,750 fewer private cars on Scotland’s roads.

The survey shows that 92.5% of car club vehicles in Scotland are equipped with the best technology for limiting air pollution, being compliant with Euro 5 or 6 emission standards (up from 80% in 2011). This minimises harmful pollution such nitrogen oxide (NOx) and particulate matter (PM).

Other key findings in Scotland include:

Matthew Eastwood, car club development manager (Scotland) for Carplus, said: “The Scottish Government has actively supported the development of car clubs in Scotland since 2010 and the survey results shows the important role car clubs are playing in tackling the serious problem of air pollution in towns and cities across Scotland.

“Car Clubs reduce the number of cars on Scotland’s roads and offer access to less polluting vehicles and electric vehicles which have no tailpipe emissions. It also proves that car club members in Scotland walk, cycle and use public transport more frequently than the average person in Scotland. All of this helps to tackle air pollution.”

Carplus chief executive Chas Ball added: “Car clubs should no longer be seen as an ‘alternative’ option, but rather a common sense approach to getting from A to B that complements active travel and public transport. Car clubs have the potential to deliver significant environmental benefits. We would urge Scotland’s residents, businesses and local authorities to find their local car club operator and explore the world of the car club.”

Transport minister Keith Brown said: “I welcome this report on car clubs in Scotland, which shows that car club members have reduced both carbon emissions and tailpipe emissions, which will improve air quality.  The Scottish Government has provided funding for the Developing Car Clubs programme in Scotland since 2010 and this has allowed the number of car clubs and communities they serve to grow. It has also funded the introduction of EVs into the Scottish Car Club fleet.”