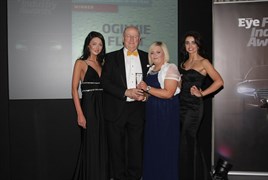 Ogilvie Fleet has been named ‘Fleet Service Company of the Year’ at the Business Eye Northern Ireland Fleet Industry Awards.

The awards, which followed a discussion forum about the key issues facing the fleet vehicle marketplace in Northern Ireland and a Motor Show, were attended by 350 people and held at the Clandeboye Lodge Hotel, Bangor.

They were judged by an independent panel drawn from the business and motor trade community in Northern Ireland.

Ogilvie Fleet was described by the judges as a “clear winner of the category for a range of customer care initiatives including clear policies on vehicle disposal, end of period damage and short term rentals”.

Ogilvie Fleet entered the Northern Ireland market some years ago when it started to provide a funding stream to enable existing contract hire providers in the province to secure business after large funders started to withdraw.

In late 2012 Ogilvie Fleet announced it was investing around £2.5 million in its business in the province as well as making available to its Northern Ireland customers the raft of fleet management online tools and other services.

In the first half of 2013 the company relocated to Quay Gate House in Belfast. The move has enabled Ogilvie Fleet to be on track to triple to 3,000 vehicles.

Jim Humphreys, who has worked in the leasing industry in Northern Ireland for many years, and was recruited as regional manager to lead the Ogilvie Fleet team in the province, was presented with the Award.

He said: “We have customers with two or three cars and we are also working with clients that have more complex and diverse fleet requirements.

“Customers in Northern Ireland want to benefit from account management at a local level and we are not only complying with that wish but our ongoing investment in vehicle management systems means service levels are at, we believe, unprecedented levels.”