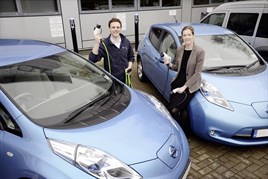 Two fleets have signed up to an electric vehicle (EV) trial to help them understand if the vehicles are fit for purpose. Their impact on the electricity grid will also be assessed.

The £9 million My Electric Avenue project is focusing on the potential problems that can arise when a large number of EVs charge in one location at once.

Residents across the UK have already signed up to the trial, with seven clusters of 10 neighbours taking part in the initiative.

Fleet News revealed earlier this year that the My Electric Project would also include a business fleet for the first time (Fleet News, January 24).

Organisers have now named the organisations taking part:  Slough Borough Council, in Berkshire, and Your Homes Newcastle. Both will lease Nissan Leafs at a subsidised rate of £100 a month for 18 months.

David Henry, environmental sustainability co-ordinator at Your Homes Newcastle, said: “When we heard that there was an opportunity to form a business cluster and to test the impact of multiple vehicle charging from our own head office, it was the opportunity we’d been waiting for.

“In total, we had 54 employees register to take part in My Electric Avenue, but whittled these down to 13 participants.

“Each of these will have exclusive access to these Leafs which they’ll take home with them.

“Six charge points have been installed at our offices and will be put to daily use when the vehicles are delivered in the coming weeks.

“I’m using this as an opportunity to investigate the introduction of EVs more generally into our organisation’s fleet.”

Your Homes Newcastle has a fleet of 43 vehicles consisting of seven low emission pool cars, 34 vans and one minibus as well as one electric vehicle.

Henry added: “We’re currently trialling a Peugeot Ion in our own fleet for 12 months.

“My impression is that our organisation is well-suited to electric vehicles as many journeys made by colleagues are around Newcastle.

“The opportunity to trial further vehicles through My Electric Avenue will provide us with further insight into their usefulness.”

For the trial’s duration, the electricity used to charge these vehicles and the demand it places on Scottish and Southern Energy Power Distribution (SSEPD), which is hosting the trial on its network, will be monitored to inform future policy decisions.

Both Your Homes Newcastle and Slough Borough Council, like each household taking part, will have specialist equipment installed on their premises alongside the vehicle charging points.

This has been developed by Chester-based EA Technology Group, which is co-ordinating the scheme, to monitor electricity usage and control when it’s used.

While all employees will take the Leafs home with them in the evening, they have also been chosen as they regularly use their own cars for business mileage.

Slough Borough Council wanted to take part in the scheme, which is being funded by electricity regulator Ofgem, as a way of cutting the carbon emissions linked to its grey fleet usage, while also generating interest in EVs among its 1,200 employees.

Jason Newman, environment quality team manager at the council, said: “We’d got an existing relationship with leasing company Fleetdrive which is arranging all the EVs and after they told us about it we jumped at the chance of taking part.

“We had 40 applications for the 10 vehicles in the space of a week and believe that by implementing the trial it will be a great way of promoting EVs within our organisation. The legacy might be that more people will go out and buy one.

“We’ve been liaising with My Electric Avenue and will have five charging points installed here which will monitor and control the electricity usage over an 18-month period.”

Newman added that he expects the 10 Leafs to be delivered over the next two months.

Fleet participation in the trial comes in the wake of an announcement that the Government will invest a further £500 million to support low-emission vehicles between 2015 and 2020 (fleetnews.co.uk, April 29).

The Office for Low Emission Vehicles (OLEV) confirmed that it will continue to provide the plug-in car grant until at least 50,000 vehicles have been sold or until 2017, whichever is the sooner.

It will also continue to provide a plug-in van grant and will review whether the scope of the grant should be widened.

A further £32m has been allocated to improve the amount of charging infrastructure available both at home and in the workplace.