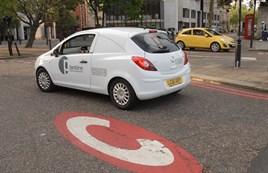 Transport for London (TfL) has confirmed that the daily Congestion Charge will be increased by 15%, from £10 to £11.50.

TfL says it is introducing a number of changes to the Congestion Charging scheme to maintain its effectiveness at managing congestion and to improve customer service.

TfL says that the increase will ensure the charge remains a relative deterrent to all but the most essential journeys into the centre of London, while raising £82.7 million over the course of the next five years, which will be re-invested into London’s transport network – including modernising London’s roads infrastructure.

Since the Congestion Charge was introduced in 2003 more than £1.2 billion of revenue has been re-invested in transport, including £960 million on improvements to the bus network, £102 million on roads and bridges, £70 million on road safety, £51 million on local transport/borough plans and £36 million on sustainable transport and the environment.

A range of changes to the Congestion Charge are being introduced in late 2015. These include:

• Customers eligible for discounts, including blue badge holders, will be able to apply for these discounts online from 2015 when Capita takes over Congestion Charge services

• Allowing customers who have paid the Congestion Charge in advance, but can no longer travel on the date in question, to amend the date for a small administration fee of £2.50

“We have listened to our customers and are making a number of changes to make paying the Congestion Charge and applying for discounts easier and simpler.”

The British Vehicle Rental and Leasing Association (BVRLA) has criticised the decision to increase the London Congestion Charge by 15%.

“This 15% increase in the daily charge is unjustified and is in effect a tax rise on essential business users who have no choice but to drive in central London,” said BVRLA Chief Executive Gerry Keaney.

“We are disappointed that Transport for London has ignored our calls to reverse this decision, and will continue to fight this battle on behalf of our members and their customers, who operate the cleanest, safest vehicles on UK roads.”

CC Auto Pay remains the most straightforward way to pay the Congestion Charge, with more than 340,000 vehicles currently registered.

It is an automated payment system which automatically records the number of days a vehicle travels within the charging zone each month and bills the account holder’s card accordingly.

Drivers registered for CC Auto Pay never have to remember to pay the charge, avoid fines and pay a reduced rate.

An annual £10 registration charge per vehicle applies to register for CC Auto Pay and accounts holders are able to register up to five vehicles per account.

From 2015 CC Auto Pay users will be able to pay by Direct Debit.