Real world tyre economy ratings out of step with labelling 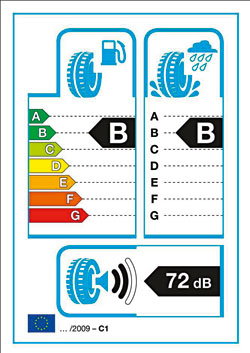 Demonstrating that the relationship between rolling resistance and fuel economy is not linear, Emissions Analytics' data highlights the issues of choosing tyres by efficiency rating. "Our test found that at mid-range speeds, F-rated tyres can perform as well as B-rated tyres." explains Nick Molden, Founder and CEO of Emission Analytics. "Tyre efficiency labels don't provide enough information for buyers to make an informed choice."

Evaluating contrasting sets of F and B rated tyres (175/70 R14) on the road, the Emission Analytics test route incorporated a range of steady-state speeds from 40mph to 70mph on normal road surfaces in consistent ambient temperatures. The tests employed the same test vehicle with the same driver.

Overall, the B rated tyre delivered superior performance in the 40-70 mph range, by an average of 3.8% mpg and 3.4% less CO2. There proved little difference at mid-range speeds, but a performance gap became evident at 55mph, and by 70mph fuel economy has improved by a substantial 12.9%.

From a buyer's perspective, this means that opting for B-rated tyres is unlikely to produce a fuel saving if journeys are mainly confined to urban routes. In contrast, opting for the same tyres and covering a substantial amount of motorway miles could produce a noticeable improvement.

Introduced in November 2012, the EU's mandated tyre label includes a test-bench-measured, rolling-resistance coefficient expressed as a fuel efficiency rating. However, with no linear relationship between rolling resistance and real-world fuel economy, better testing and modelling would allow private and fleet buyers to make informed choices and select the tyres that will deliver a tangible fuel saving.

The highly accurate measurement of real-world vehicle emissions is possible through the use of Emission Analytics' Semtech-DS system, the benchmark for portable emissions measurement systems. Collecting data at a sampling rate of 1Hz, it provides a constant stream of test data that's detailed enough to evaluate the efficiency of tyres.

A report compiled by the National Tyre Distributors Association (NTDA) and Lanxess, the manufacturers of high-tech rubber for tyres, found that one year after their introduction 93% of tyre retailers stated customers never or only occasionally requested information on the label.

In addition only 30% knew that tyre choice could affect fuel consumption.