Advisory fuel rates (AFRs) fail to reflect the real-world cost to diesel and some petrol company car drivers, according to data seen exclusively by Fleet News.

Drivers of small-engined diesels are being hit hardest, suffering a shortfall of 10% – almost £150 for every 10,000 miles driven.

The diesel rates for mid-size and large engines saw drivers out of pocket by £62 and £102 respectively compared to real-world figures for the same distance travelled.

Mid and small-engined petrol cars also didn’t do much better, with the advisory rate showing a deficit of £126 and £84 respectively.

But while some drivers feel short-changed, those behind the wheel of a large-engined petrol or hybrid car paid according to the Government’s guidelines are costing companies dear.

An at-work driver paid the highest AFR rate for a petrol-fuelled car would have been overpaid by £172 for driving 10,000 miles last year, figures from The Miles Consultancy (TMC) suggest.

However, its analysis of nearly 5,000 driver records shows that petrol hybrid drivers are benefiting the most.

The figures suggest that the advisory rate becomes even more generous as the engine size increases.

The biggest cash gain was had by employees who drove a hybrid car with an engine size bigger than 2.0 litres.

Data from TMC shows that drivers who received the highest AFR rate were paid 5.3ppm (27%) more than the real-world cost of fuel incurred.

For an employee driving 10,000 miles, that would result in them receiving an additional £529 compared to the real-world cost of the fuel.

The results were broadly in line with previous comparisons carried out by TMC in 2010 and 2012.

Managing director Paul Jackson said: “Whenever reimbursement rates are too high or too low, it incentivises drivers to understate private mileage when making  expense returns.”

HM Revenue and Customs (HMRC) first published AFRs in January 2002 and they are intended to reflect actual average fuel costs at the time they are set.

The aim is to save time for both employers and HMRC by publishing figures that can be used in the majority of cases and give employers more certainty about what the mileage rates that they choose to apply for tax and National Insurance contributions (NICs) are.

If the rate paid per mile of business travel is no higher than the AFR for the particular engine size and fuel type, HMRC will accept that there is no taxable profit and no
Class 1 NICs liability.

“This reflects the fact that they are intended to reflect actual average fuel costs,” said HMRC.

However, importantly, it added: “HMRC is not suggesting that employers should always use these rates for reimbursing employees for business travel in company cars.

“The advisory rates represent average fuel costs and employers may wish to set rates which better reflect their particular circumstances.

“For example, where the cars in the fleet are fuel efficient, employers may prefer to reimburse at lower rates than those outlined here.

“The advisory rates will not be binding where an employer can demonstrate that the cost of business travel in company cars in the fleet concerned is higher than the guideline mileage rates – perhaps where employees need to use particular types of car such as 4x4s to cover rough terrain.”

Alastair Kendrick, tax director at MHA MacIntyre Hudson, said: “In my experience, it is difficult to persuade HMRC to agree to a payment in excess of the AFR.”

If an employer pays mileage rates that are higher than the advisory rates but is unable to demonstrate that the fuel cost per mile is higher, there is no fuel benefit charge.

“We will always see problems around fixed rates given the regional variation in fuel prices and HMRC issuing one rate,” added Kendrick.

“What HMRC has produced in issuing these rates is a lot better than what we saw previously, but it still needs some attention to ensure that it is totally fair.”

Kendrick thinks it’s an area of taxation which should go to the Office for Tax Simplification to consider.

He said: “It is currently looking at travel and subsistence, so why not also look at this?”

In the meantime, however, TMC suggested that fleets trying to reduce their fuel and mileage costs should steer drivers towards choosing cars with good real-world pence per mile performance – i.e. mid-sized diesels and hybrids, while implementing actual cost reimbursement policies for fuel costs.

Jackson said: “Actual cost reimbursement ensures that both the fleet and the driver share the benefits from the fuel cost saving from choosing more frugal vehicles.” 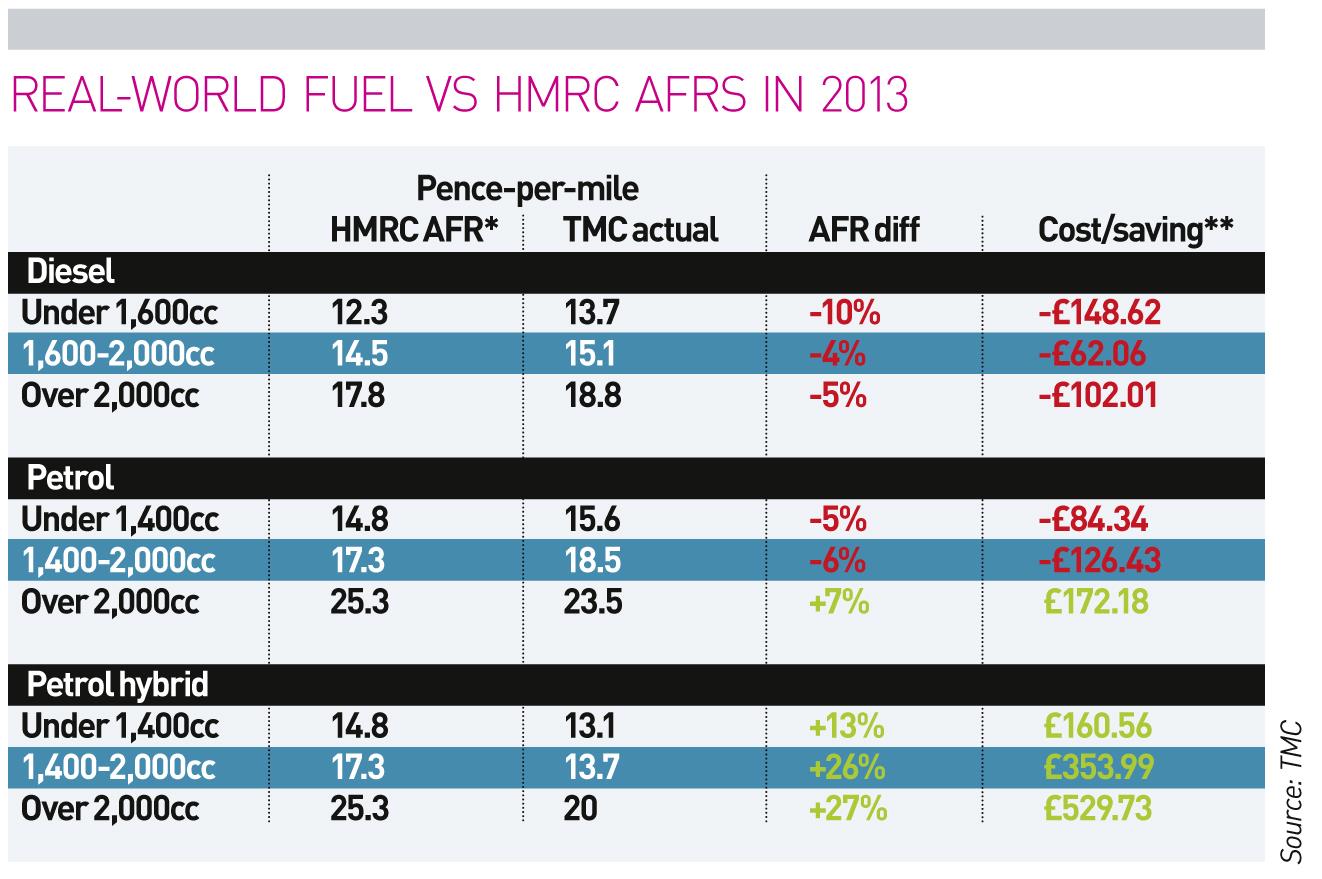 Data is taken from vehicles on the TMC Mileage Audit database. Fuel cost and litres are taken from fuel card data; mileages are from audited reports by drivers.

The table compares actual fuel costs (calculated from transaction costs and actual fuel economy captured by TMC) and AFRs (average AFRs in each band during 2013).

A negative AFR difference indicates that the average driver in that band would have lost money if they claimed business mileage (or reimbursed their private mileage) at the AFR rates rather than by calculating the actual cost of fuel used.

A positive difference shows the average percentage gain made by drivers who claimed AFRs rather than actual cost.

The cost/saving column shows the average gain/loss drivers would have made by using the AFR rates over 10,000 miles in 2013.

** Cost or saving to driver from using the AFR rates rather than claiming/reimbursing 10,000 miles’ fuel at actual cost 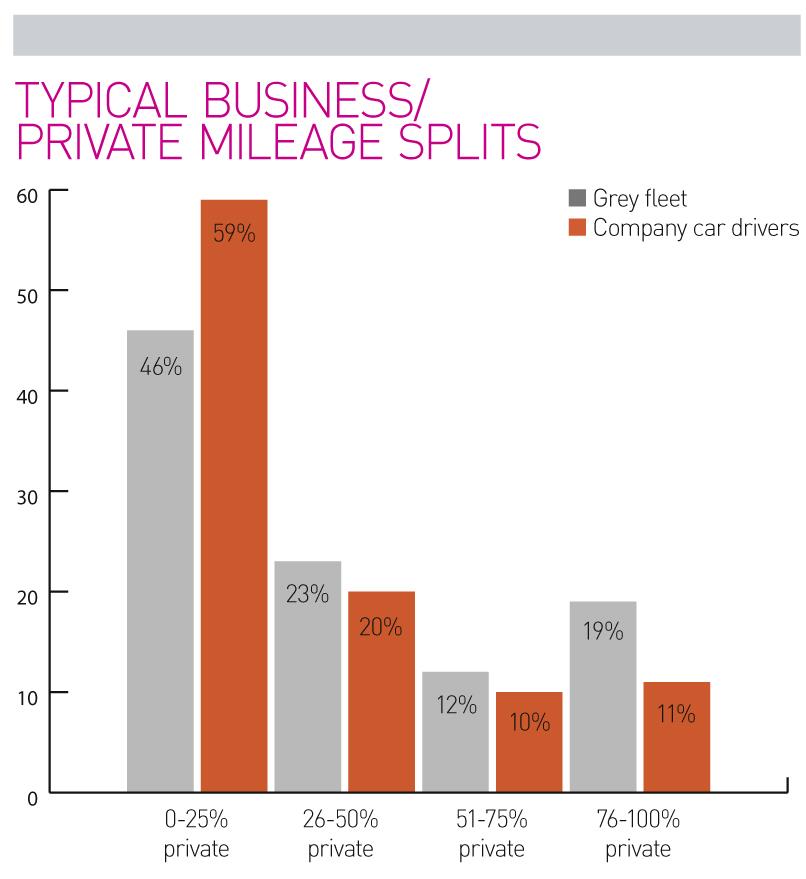 Nearly 60% of company car drivers and almost half of grey fleet drivers report that 25% or less of their annual mileage is for private purposes, according to TMC.

One-fifth (21%) of company car drivers and 31% of grey fleet drivers say that private motoring accounts for more than half of their car use.

TMC surveyed approximately 6,000 drivers who use its mileage audit system, with a 50:50 split between company car drivers and grey fleet users. 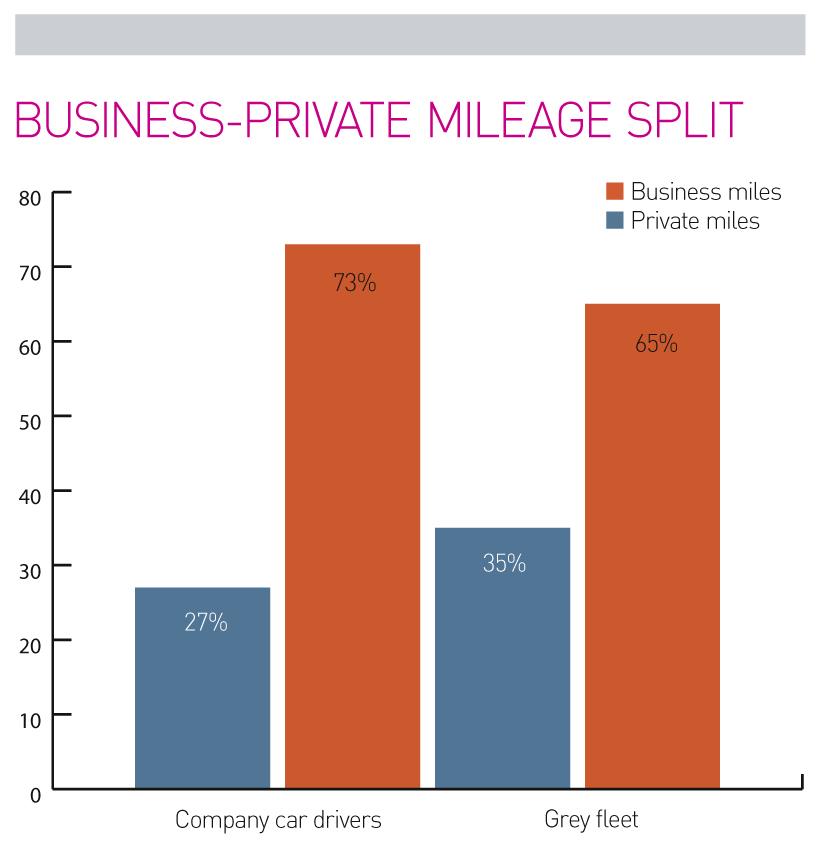 Business mileage accounts for about three -quarters of the mileage driven in company cars and two-thirds of that driven in grey fleet cars, according to TMC data.

It looked at an overall comparison of business/private mileage splits of company and grey fleet drivers who had collectively covered 101 million miles.