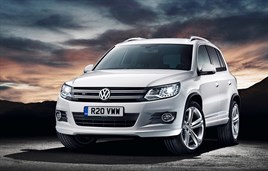 ESC (previously fitted to almost every model in the range and optional on others) now comes included as standard in every 2015 model-year Volkswagen.

ESC detects critical situations at an early stage, and takes action – by applying the brakes to one or more wheels and reducing engine power if necessary – to stop skidding and help bring the car safely back under control.

As well as enhanced safety, there’s now enhanced entertainment in every Volkswagen, too, thanks to standard-fit DAB digital radio tuners across the range.

Volkswagen added it from May 2012 in every 2013 model-year vehicle from Polo to Touareg. It was added to the Phaeton later in 2012, and introduced as an option on the Up in 2013.

DAB digital radio gives customers a greater than ever choice of stations, from music to comedy to drama to sport (cricket aficionados in particular will be delighted that they will be able to listen to Test Match Special, while crystal clear BBC Radio 5 Live is a boon for all sports fans).

Of course, all Volkswagen audio systems also include FM radio reception too, and the majority of models come with Bluetooth audio connectivity, as well as iPod, USB or aux-in connections.