Biggest ever Company Car in Action praised by fleet industry 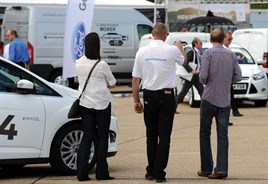 Feedback from fleets and vehicle manufacturers reveals that the 2014 Fleet News Company Car In Action event was an overwhelming success.

In total, 929 fleet decision-makers attended across the two days, up six per cent on 2013. They were able to take their pick of more than 300 cars and vans, from 18 manufacturers representing 25 brands.
In addition to driving on one of four test tracks at Millbrook Proving Ground, fleets also flocked to a DVLA debate held in association with ACFO to hear how changes being implemented by the Agency will affect their operations – 90 attended the seminar.

John Pryor, ACFO chairman, said: “ACFO was delighted to be involved in Company Car In Action once again, especially with the joint seminar enabling fleet decision-makers to hear directly from the DVLA on a raft of changes in respect of driver licences and vehicle documentation. It is vital that fleet operators are able to hear first hand and have the opportunity to quiz representatives of organisations on issues that directly affect them.

“Company Car In Action is a unique event that grows in popularity year on year. ACFO believes the inclusions of the seminar and debate opportunity added to the must-attend feel the event continues to gain.”

Day two included a seminar discussing best practice for grey fleet policies – where organisations allow staff to use their own cars for business.

But much of the action took place on Millbrook’s varied test circuits, purpose-built for evaluating road vehicles.

Jeff Smailes, marketing and administration manager, fleet and business sales, at Jaguar Land Rover UK, said: "Company Car In Action is a fantastic opportunity to showcase our products to a wide range of influential fleet buyers. And it gives us a chance to get potential customers to test drive our vehicles alongside rivals, so they can see just how competitive our cars are.

“With the Jaguar XE sports saloon and the Land Rover Discovery Sport launching in the near future, Company Car In Action is an event that's only going to become more important to Jaguar Land Rover."

Sally Dennis, head of fleet at Mercedes-Benz, said: “One of the vital aspects is that our customers can test drive our products – indeed, we conducted almost 700 this year.

“It’s also an opportunity to launch new cars - this year we launched the new C-Class and conducted more than 160 test drives. More fundamentally, it demonstrates that Mercedes-Benz is committed to fleet – we’re focused on CCIA and prioritise it above other events.”

Jon Hunt, manager for Toyota and Lexus fleet marketing, echoed the views as the new Toyota Aygo was available to drive for the first time, while the forthcoming Lexus NX SUV made its first public appearance in front of fleet managers.

He said: “Company Car In Action once again provided the ideal conditions for us to showcase new models such as the new Toyota Aygo and Lexus NX as well as the rest of the product range. With its relaxed environment and high quality of guests it was perfect opportunity for us to engage and we provided more than 500 test drives.”

Rob English, corporate operations manager at Honda, added: “Our cars were constantly in demand throughout the event with both existing and new customers and we’re confident that we’ll be adding more Honda Earth Dreams Technology products to fleets who want great styling, practicality, flexibility and efficient running costs.

Bauer Media B2B and transport event director Chris Lester said: “We have been thrilled by the reaction to Company Car in Action in 2014, from both attendees and exhibitors.

“Not only is it proof that we provide a highly valuable event to the fleet industry, with the driving opportunities and seminars, it shows we also offer manufacturers a great venue to showcase new products and allow potential customers the perfect venue for evaluating vehicles.

“It gives us the confidence to raise the bar even higher next year, preserving the status of Company Car in Action as the only arrive and drive event that fleet decision makers need to attend.”