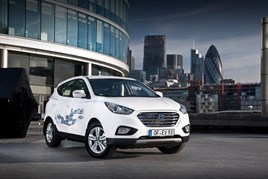 The ix35 Fuel Cell, the world’s first mass-production fuel cell electric vehicle (FCEV), was driven between Oslo (Norway) and Malmö (Sweden) via Gothenburg (Sweden) and Copenhagen (Denmark). The journey took 10 hours to complete, at an average speed of 76 km/h (47mph), taking in city and highway driving.

The vehicle was in production-standard specification, and exceeded its stated range of 594 kilometres (369 miles), with the trip computer still indicating nearly 10 kilometres of range available at the journey’s conclusion.

Marius Bornstein said: “We had planned to finish in Copenhagen, but realised there was enough hydrogen left in the tank for a longer drive. When we arrived at the filling station in Malmö we still had a few kilometres of range remaining. To achieve this distance on just one tank of hydrogen shows the potential of this technology and the ability of the Hyundai ix35 Fuel Cell. I believe this is a world record.”

In April 2012, the two drivers travelled from Oslo to Monaco in an ix35 Fuel Cell, a distance of 2260 kilometres, demonstrating the usability of fuel cell cars and the growing refuelling infrastructure.

As part of the Hydrogen For Innovative Vehicles (HyFIVE) initiative, recently established to grow Europe’s refuelling infrastructure, a hydrogen station was opened in Malmö in June 2014. As part of HyFIVE, 110 fuel-cell vehicles from five manufacturers will be delivered to customers across Europe, including 75 from Hyundai.

The Hyundai ix35 Fuel Cell is the latest model from a development programme that began in 1998, and continues at the company’s dedicated fuel cell research centre at its Eco Technology Research Institute in Korea.