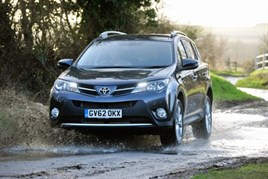 Petrol-electric versions of the RAV-4 and an all-new Prius range are expected to boost the Japanese firm's share of UK business registrations.

“Our aim is to build on our 3.5 per cent share of fleet sales and we think these cars will increase the momentum we've already achieved in a sector of the market that is still developing,” Toyota GB marketing director Chris Hayes told Fleet News.

In an interview as the company unveiled its latest Yaris supermini range in Germany, he said: “At present, the sector is accounting for half of the 25,000 hybrid models we sell each year and we think that adding a C-segment SUV to our offering should give us the extra appeal we need to lift our share to four per cent.

Due next year, the hybrid RAV will come in front and all-drive forms and will share its underpinnings with the NX, a new compact SUV being launched in autumn by Lexus, Toyota's premium brand. By the end of 2015, it will be joined by the next-generation Prius, which will also feature a new platform.

“Our overall hybrid volume grew by 30 per cent last year and we are expecting similar growth this year. Until the arrival of the fuel cell car, we remain convinced that hybrid power is the big thing in motoring and this is being backed up by our sales.

“As our rivals continue to introduce competitor models, customers are becoming increasingly aware of hybrid as a mainstream powertrain,” said Hayes.