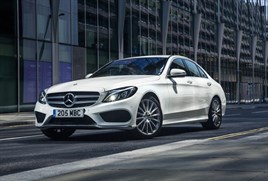 Thatcham automotive research centre has given top marks to the ‘self-braking’ Mercedes-Benz C-Class, with major benefits to road safety and motorists’ insurance premiums.

In tests, the Mercedes braking system avoided a potentially lethal collision by ‘sensing’ another vehicle in its path and bringing itself to a complete stop without input from a driver at speeds of up to 25mph.

The C-Class is now the best performing standard-fit automatic braking system on the road, according to Thatcham, thanks to advanced sensors and sophisticated under-bonnet software.  To date many of the best ‘Autonomous Emergency Braking’ (AEB) systems have only been able to avoid collisions at around half the speed achieved by the advanced Mercedes technology.

The implications for road safety are ‘enormous’, according to Thatcham Research, which carries out official crash tests as part of the Euro NCAP system.

“AEB is being hailed as the new seatbelt and is already saving lives,” said Peter Shaw, chief executive of Thatcham Research.

“And this system is amongst the most advanced to have been tested."

“AEB cuts in when it detects a potential collision and the driver has for some reason failed to apply the brakes.

“In the real world AEB is already avoiding countless accidents and these latest tests show that the Mercedes system has moved the technology forward significantly for those standard fit systems.”

Thatcham says that because of the extra level of safety that Mercedes’ new technology offers, new C-Class customers will see their vehicle’s insurance tumble by five entire ‘groups’, representing savings of up to 15 per cent or £80 on a typical policy.

Thatcham began carrying out tests on ‘auto-braking’ cars in 2007.  The first on the UK market was Volvo’s popular XC60 SUV in 2008, with other manufacturers swiftly following their lead.

So successful have the systems been, says Thatcham, that seven per cent of new cars now on sale have AEB as standard, while 17 per cent are offered with AEB as an option.

Examples currently on the market include Ford’s AEB system on its Fiesta and Focus models for just £200 while Nissan offers its optional system on the Qashqai for £495, and is standard on the Acenta Premium and Tekna models.