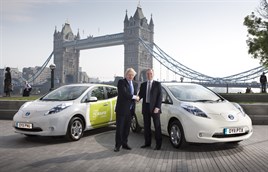 Electric vehicles could become commonplace on Government fleets and in London through initiatives aimed at driving their early adoption and improving air quality in the capital.

The Bolloré Group will take over responsibility of Source London’s EV charging infrastructure from Transport for London in September, paving the way for a plug-in car sharing scheme in 2015.

Kramer told delegates at the Low Carbon Vehicle Partnership annual conference that she expects every car on the road to be ultra-low emission – below 75g/km of CO2 – by 2050.

Kramer says the £5m will allow every central Government fleet to review its arrangements and consider how greener vehicles can be used.

It’s anticipated that more than 150 plug-in vehicles will be added to Government fleets in the first wave of the scheme.

The Government Car Service, which provides cars for ministers, will lead the way and plans to order the first electric cars in the autumn.

“Government must lead by example,” said Baroness Kramer. “Today’s investment will see Government switching a significant number of plug-in cars and vans into our fleets and leading the electric charge.”

The scheme will be expanded in the autumn to allow the wider public sector including councils, police forces and the NHS, to introduce more plug-in vehicles. This is expected to add approximately 135 plug-in vehicles to these fleets.

Cars and vans will be recommended on a like-for-like basis and the reviews will consider the wholelife cost of the vehicles to ensure that each replacement makes economic sense.

The Government initiative comes as London is set to introduce an EV car sharing scheme along the same lines as those seen in France.

The Bolloré Group successfully launched Autolib – an EV car sharing scheme in Paris – in 2011 and has now won the tender to run Source London.

Matthew Pencharz, environment advisor to the Mayor of London, expects the ULEZ to reduce NOx by 47%, particulates (PM10) by 58% and CO2 by 12% in the central London area.

He said: “We really see this as a game-changer for addressing carbon emissions and air pollution, and also stimulating this industry by giving certainty to the market.”

Similar services are provided by the company in Lyon and Bordeaux, and it is preparing to launch an EV car sharing scheme in Indianapolis.

In London, the company says it intends to expand London’s charging network from around 1,400 to 6,000 in the next three to four years, while introducing a fleet of its Bluecars for the scheme.

Speaking at the LowCVP conference, Cédric Bolloré said: “If we want to have a large number of electric cars in London we need to have a scheme where you are in walking distance of a plug.

“In Paris, we have twice as many charging points as tube stations. This gives confidence to people because they know they’ll be able to charge their car where they want.”