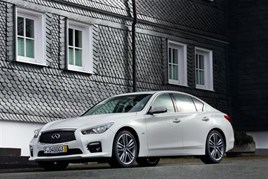 Infiniti has announced the pricing for its new Q50 2.0-litre petrol engine is to start from £31,755.

The lightweight 1991cc turbocharged petrol 4-cylinder engine develops (350Nm) of torque and 211PS of power which is transmitted through a 7-speed automatic transmission to the rear wheels. Flexible and efficient driving is assisted by a wide torque band curve that begins at just 1250rpm.

The 2.0-litre turbo engine is only available as an automatic and starts from the Premium grade level. Like for like, it is £145 less than the diesel Premium equivalent.

Over the next five years, Infiniti will increase its model range by 60 per cent and more than double the number of its powertrains.

First revealed in Europe at the 2014 Geneva Motor Show in March and already launched in China, the Q50 petrol, will make its sales debut in Europe in autumn.