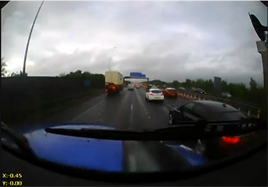 An in-vehicle camera from Smart Witness has captured a dramatic collision between a Nissan and a HGV on the M6.

The footage captures the moment the blue Nissan Note hits the side of the lorry and then is bounced across the road and flipped around.

The collision was caused by the Nissan driver failing to notice the lorry alongside and veering into the HGV's lane.

In many cases, an incident of this kind would involve both drivers blaming each other, but in this case the camera footage simplified the claims process, cutting down paperwork and costly insurance battles.

Fleet users of SmartWintess have reported savings of up to 20% on their vehicle insurance. Insurers have found that just 2% of incidents recorded on SmartWitness cameras result in disputed claims - against an industry norm of 40% of motor claims.

SmartWitness managing director Simon Marsh said: "Once a company fits vehicle CCTV they never go back to having their drivers operating without cameras.

"Most MDs I speak to tell me they wish they had fitted them sooner.It’s great to see so many hauliers being so proactive in using the cameras to improve driver behaviour as well as protecting themselves from false claims.

"This new video perfectly illustrates their worth. It might seem like a relatively minor collision, but these incidents in the days before cameras would result in a big drain on time and expense as both sides argued it out with insurers and also risked damaging hauliers’ insurance claim experience.

"Not any more - the SmartWitness footage goes off and it is settled almost instantly."

WATCH THE FOOTAGE BELOW: