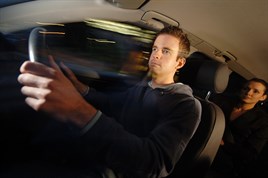 A temporary toll road made of rolled chippings that bypasses a closed section of the A431 between Bath and Bristol has been opened.

The Kelston Road was shut in February after a landslip and will not be repaired until the end of this year.

Recognising motorists faced a 10-mile detour while repairs are carried out, businessman Mike Watts arranged for the track to be built which costs £2 per car for the 400m journey. Vehicles over 3.5 tonnes are not allowed to use the track.

He said although the road did not have planning permission he would be applying for this retrospectively.

Bath and North East Somerset Council, which had previously rejected the idea of building a temporary road, says it appreciates the difficulties that local residents have experienced since the emergency closure.

“We will start work this month to deliver a permanent solution as quickly as possible, but will not encourage proposals that have not been proven to be safe or compliant with statutory requirements,” said a council spokesman.

“The Council continues to monitor the site for further movement.”

Although the ground has stopped moving, the council says it remains an active landslide which could move without warning.

“In the absence of any information from the toll road promoters the council has concerns about the impact of traffic loading on the land above the slip,” the spokesman continued.

The spokesman said: “A temporary toll road requires planning permission and no application has been received.

“In view of public concerns, the council’s planning enforcement team is currently investigating this matter.”

The council explained it has no details to confirm the toll road design meets safety standards and no evidence that insurances are in place for any member of the public who use the private toll road.

It also claimed that the road could prolong the construction period and increase the cost of the repairs, because it will need to bring in vehicles to construct the permanent repairs and access to the temporary toll road is likely to generate a need for more traffic management on site.