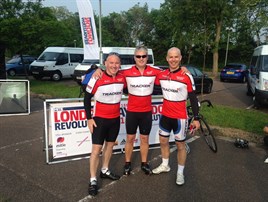 Tracker is sponsoring ‘Team Rainbow’ in its bid to cycle the length of Britain from the farthest tip of Cornwall at Land’s End, to the very Northern-most tip of the UK at John O’Groats.

Sporting TRACKER logoed vests and with a TRACKER unit monitoring every movement, the team aims to raise over £17,000 for Marie Curie Hospice, Solihull in memory of Shelia Clatworthy.

Team Rainbow is made up of Paddy & Jay Clatworthy and long-time friend, Aron Adams. The team was formed after Jay & Paddy's mum, Sheila, a retired teacher, passed away in the Solihull hospice on 11 September 2011, aged 71. Aron comments, ‘We have been training for over a year and have already ridden a number of warm-up events this year as a team. As we live in different parts of the country, it can be tough but we manage around 150 miles a week of solo training.

A true test of any cyclist, the iconic route takes riders through some of the UK’s most spectacular scenery, from the rugged coastline of Cornwall to the rolling hills and valleys of the Peak District and finish with the majesty of the Scottish highlands. No other single event manages to string so much exceptional cycling together along so many unknown and hidden back roads

Paddy said: "It had been said that with the right initial prognosis and treatment from early on in our mum’s illness, she could have had up to an extra five years, but because she was diagnosed late, her time was dramatically reduced. As mum received exceptional care from the Marie Curie Hospice in Solihull during the last 5 weeks of her life, it is important to us that we raise as much money as we can, to ensure other terminally ill people can continue to benefit from the excellent care they provide.”

David Wilson, sales and services director, added: "We are honoured to be the official sponsor of ‘Team Rainbow’. We fully support the teams endeavour to raise money for Marie Curie Hospice and we wish them all the luck with achieving their goal.”