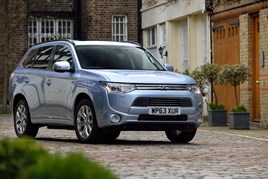 Lance Bradley, managing director of Mitsubishi Motors in the UK, said: “The new Outlander PHEV has quickly established its credentials. We have reached a defining moment in vehicle drivetrain technology which challenges conventional wisdom. Few would have predicted that a family-sized 4 x 4 sports utility vehicle could become the UK’s best-selling plug-in hybrid based on economy, on and off road performance and practicality”.

The Outlander PHEV uses both electric and petrol power. Unlike non plug-in hybrid vehicles, the Outlander PHEV can travel substantially further on battery power – 32.5 miles - more than enough to accommodate most daily average journey distances. As such it rarely needs to visit a petrol pump. The impressive electric range gives the vehicle significant environmental credentials.

The sales success of The Outlander PHEV is having a positive effect on other Mitsubishi models. The company’s passenger car sales are up 164% in August and 36% year to date.