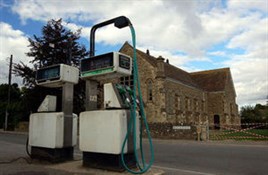 Seventeen of the UK’s most rural communities are a step closer to getting up to a 5p per litre fuel price cut after the Government’s rural fuel rebate scheme cleared the major hurdle of European Commission (EC) approval.

Chief Secretary to the Treasurer Danny Alexander spearheaded the Government’s application to the EC for 17 of the most rural areas in mainland UK to receive a fuel duty discount last year.

The scheme will allow 125,000 people living in the selected areas, who currently face some of the highest fuel prices in the country despite depending on cars for transport, to benefit from cheaper fuel.

The UK’s most rural islands already receive this discount, but it will be the first time the EC has approved a fuel discount in on the UK mainland.

EC approval means that the issue is now awaiting agreement from other member states through the Council of the European Union.

With a view to implementing the scheme in the current Parliament, the Government is pressing ahead with a formal consultation on the regulations necessary to implement the change today.

Alexander said: "This is great news for motorists in these areas and brings a duty discount a step closer.

"Even though fuel prices are falling across the country, they are still higher in very rural areas.

"While we have one more stage to go, I want to make sure we are ready to implement this as a top priority so we will press for this to be heard as soon as possible and are today publishing the necessary draft regulations.

"I’m determined to implement the rural fuel rebate in the current Parliament."

Simon Williams, fuel spokesman at RAC, said: “This announcement is a landmark moment for mainland rural communities which are the last to benefit from the record low fuel prices now widespread across much of the UK.

"Filling stations provide a crucial public service in more remote areas and the plans to widen the Rural Fuel Rebate Scheme will help reduce prices closer to those enjoyed in other parts of the UK.

“People living and running businesses in rural communities by their nature rely most heavily on their vehicle, so it’s right that they should not have to pay significantly more for fuel.

"At the same time, we would caution that rural motorists will probably never see fuel cost parity with urban areas.

"This is due to higher delivery costs and the fact that motorists in towns and cities tend to benefit from intense competition between supermarket and larger independent fuel retailers, who sell greater volumes.

“We now look to the other European member states to rapidly approve the scheme so that motorists can benefit from cheaper fuel without delay.”

Brian Madderson, chairman of the Petrol Retailers Association, also welcomed the news. The organisation has liased with HM Treasury during the process.

The areas which included in the Government’s application the European Commission are: