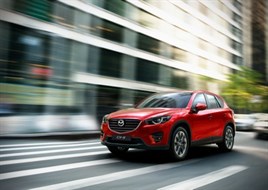 Thirteen 2.2-litre diesel versions – six of which are available with all-wheel drive – are available, as are three 2.0-litre petrol models.

The standard equipment specification of every model in the line-up has been enhanced through the addition of manual front passenger seat height adjustment, an electronic parking brake, a coming/leaving home headlamp function, and the company's Multimedia Commander with separate volume dial for safe, intuitive interactivity and infotainment control.

Adaptive LED headlamps automatically adjust the array of high beam illumination to avoid dazzling the occupants of both oncoming and preceding vehicles, without the need to switch to low beam lighting.

The lane-keep assist system with driver attention alert builds on the existing lane departure warning system, providing steering wheel vibration and assisted steering if the driver strays from the middle of the chosen lane. Having first learned the owners driving style, DAA operates at speeds of over 40mph, alerting drivers to take a break if it detects a degradation in driving style indicating fatigue.

Advanced blind-spot monitoring with rear cross-traffic alert combines two systems in one for greater safety. The system's larger detection area to the side and rear of the vehicle provides better coverage, while blind-spot monitoring employs the same system sensors to detect pedestrians, bicycles and other vehicles when reversing.

Rear Smart City Brake Support (RrSCBS) operates at speeds of between 2mph and 5mph when reversing, automatically applying the brakes if the system detects an imminent rear impact.