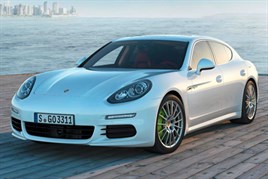 A council had to pay more than £8,600 in early termination charges for a Porsche its former boss used to drive.

Bryn Parry-Jones was given the luxury perk, while the chief executive of Pembrokeshire Council, reports ITV.

He left the local authority last October with a £277,000 severance package following calls for his resignation into a row over pension contributions.

It later came to light the 62-year-old had been allowed the hybrid Porsche Panamera as his work vehicle.

Last week, Pembrokeshire Council was ordered by the Information Commissioner to reveal the full cost of the car within 35 days.

However, a local councillor has since revealed that ending the lease agreement ahead of schedule cost £8,670 - a figure council officials confirmed was correct.

Councillor Jacob Williams said it was unacceptable the council had allowed taxpayers' cash to fund an extravagant company car.

He wrote on his blog: “The public's piggy bank was already squealing but this nigh-on £9k early termination fee - which I'm told consisted of four monthly payments - sprinkles salt into the wound.”

Jones’ departure last year came following a vote of no-confidence from councillors over allegations he was not entitled to receive cash payments in lieu of pension contributions.

Police inquiries into the payments were later dropped after no evidence of criminal offences were found.