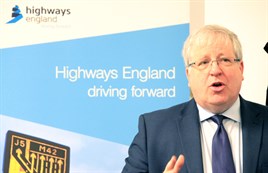 The new headquarters of Highways England - the company that will run motorways and major A roads – has been opened today by Transport Secretary Patrick McLoughlin.

The new company, which replaces the Highways Agency on April 1, marks a step change in how England’s roads are maintained and managed and will be responsible for delivering more than £15 billion of investment by 2021.

The move is part of a radical package of road reform that is expected to save the taxpayer at least £2.6 billion over the next 10 years.

McLoughlin said: “Infrastructure is a vital part of this government’s long term economic plan to secure a better future for this country; that is why we are investing £15 billion in the biggest upgrade to England’s strategic roads in a generation.

“The creation of Highways England will mean better value for money, improved customer satisfaction, more road capacity, improved safety and a better quality of service for millions of people who use the strategic road network every day.”

Around 330 people have moved from former premises in Dorking, which would require significant refurbishment, to the new headquarters in Guildford, which has better links to the strategic road network. The Dorking building will now be sold.