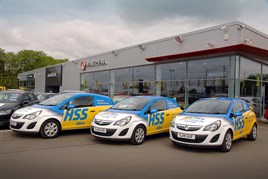 HSS Hire Group is to install Lightfoot in-cab driver behaviour training in the majority of its new commercial vehicles.

The decision follows a successful trial that led to fuel savings of 12% and even safer driving.

HSS will be installing Lightfoot in all new 3.5-tonne Mercedes Sprinter and Ford Transit vans, its Mercedes Vito vans used by fitters, and its Vauxhall Corsa vans used by sales teams.

This will mean the system will go into an expected 150 or more new vehicles this year, joining the 100 HSS vehicles that already use Lightfoot as a result of the trial.

Lightfoot is a unique and revolutionary in-cab driver behaviour training device, which has been developed as an intelligent alternative to traditional telematics. It provides proactive, real-time feedback through visual and voice prompts to ensure that more self-aware driving behaviour is maintained in the long term.

During HSS’ trial of Lightfoot, it was initially used for six weeks in 10 3.5-tonne Mercedes Sprinters across HSS’ Cardiff, Bristol and Exeter depots. The trial was then extended to include the whole of the South West, Wales and several areas of the Midlands, involving a total of 100 vehicles over a total of nine months.

In addition to the significant fuel efficiency gains, the use of Lightfoot during the trial also showed an adoption of safer driving habits, with better anticipation of road features.

“Our drivers have responded really well to the technology and we’re seeing improvements across the board. We’ve found that the longer a driver uses Lightfoot, the more his or her driving style improves. Training drivers in real time really does make for safer road use.

“In addition to the fuel savings, our vehicle maintenance costs have reduced. We may also be able to negotiate lower insurance premiums because Lightfoot encourages safer driving.

“Furthermore, we needed something easy to manage, and were impressed with the simple reporting which allows us to see what’s happening across our fleet. ”