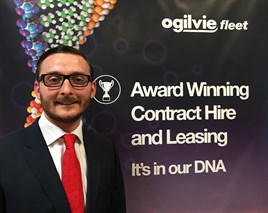 Ogilvie Fleet is to enter the UK car salary sacrifice market following the recruitment of an experienced industry professional.

It is the latest in a series of 2015 initiatives by Ogilvie Fleet to expand its share of the UK company car and van market and follows the recent announcement of a major new £100 million funding facility with HSBC.

Ogilvie Fleet, which has almost 12,000 company cars and vans on its books and plans to almost double the fleet by 2020, says interest from existing customers for car salary sacrifice has increased in recent months.

Historically, Ogilvie Fleet’s heartland has been the sub-100 fleet sector but the company recently appointed David Raponi to lead its growth into the larger fleet sector. The business believes that salary sacrifice car schemes can prove attractive to large and smaller employers.

Ogilvie Fleet sales and marketing director Nick Hardy said: “Growing interest from our customers for a salary sacrifice car solution has increased recently so we have developed a product and tailored our market-leading IT systems to enable us to meet client demands.

“As Ogilvie Fleet increases its customer base, we believe salary sacrifice schemes will be in demand as the financial benefits remain attractive to both employers and employees thus making the solution a key part of our expansion plans.”

He continued: “Many leasing companies already have a salary sacrifice offering, but it is effectively a “bolt on” to the menu of funding solutions they already offer.

“In keeping with our reputation for customer service excellence and sophisticated IT systems, we now have a bespoke salary sacrifice car product available that we believe is at the cutting-edge of what is available.”

Hardy said: “We want to be the market leader in that sector. Too frequently we hear that a salary sacrifice car scheme is most suited to the very large employers, but that is not true. We believe salary sacrifice is a flexible benefit that can prove attractive to smaller and medium-sized employers.”

Jessop will lead Ogilvie Fleet’s drive into the sector having joined from Zenith.

Jessop said: “My favourite time at Zenith was working in the business when it was bespoke and niche and we could tailor a package for any customer.

“I view Ogilvie Fleet as being of a size where it can bespoke products to meet individual client requirements alongside the fantastic award-winning customer service, which the company is well-known for.”