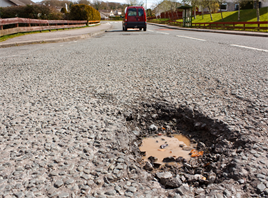 Despite the last two winters being relatively mild for much of Britain, analysis of RAC breakdowns has revealed there are signs that Britain’s roads are still not in as good a condition as they should be.

Even though two years have passed since the cold winter of 2013 wreaked havoc on road surfaces up and down the country, the RAC reports that it has seen an 82% increase in the number of suspension spring faults its patrols have been called out to deal with in the first two months of 2015.

In January and February RAC patrols attended nearly 7,500 breakdowns for motorists who had experienced issues with suspension springs – traditionally the single most visible fault that highlights issues with the quality of road surfaces. In contrast, in the first two months of 2014 there were just over 4,000 suspension spring call-outs and 2013 – the year that gave rise to so many potholes – nearly 5,600.

With the replacement of suspension springs in an average vehicle costing up to £350, the RAC estimates that motorists are potentially facing a combined bill of more than £1 million per month – with the poor state of the UK’s roads largely to blame.

RAC chief engineer David Bizley said: “When a vehicle’s spring fails it can’t be driven and usually results in a call to us as the owner can’t simply take it to a repairer. The problems caused by bad quality road surfaces are not confined to suspension springs either – shock absorbers can be affected, and tyres and wheels potentially damaged.

“The sharp increase in suspension spring faults that we have seen across the country really does cast a cloud on the quality of our roads. We will be closely monitoring these figures in the coming months to see whether the trend continues. Experience tells us that these problems are normally worse in the first half of the year, so if numbers are still high come the summer we will know that local authorities are still struggling to get on top of the maintenance backlog.”

Bizley added: “Research from the latest RAC Report on Motoring shows that motorists are growing increasingly concerned about the state of the roads, with 41% of those surveyed in 2014 telling us that it is a major issue and two-thirds believing their local roads have been neglected and have deteriorated in condition."