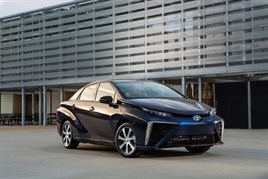 Toyota will launch the Mirai hydrogen fuel cell car in September, although numbers will be strictly limited. Around 100 will come to Europe a year for the first two years, with the UK taking 20-30. Pricing is likely to be £45,000 to £50,000.

Partners will be carefully selected – most will be in and around London – with a view to having users who can play a vital role as a catalyst for change, said Matt Harrison, Toyota GB president and managing director.

The Mirai, which made its European debut at the Geneva motor show in March, has a fuelling time of less than three minutes and a 300-mile range; the issue is a lack of a refuelling infrastructure.

The UK will have around 15 hydrogen refuelling stations by the end of 2016 as part of an £11 million investment jointly funded by the Government and industry, rising to 65-70 by 2020. At present there are just three sites offering public access.

“The priority is to have national coverage but we are not seeing the oil companies on the front foot to introduce it,” said Harrison.

Neil Broad, general manager Toyota and Lexus fleet and remarketing, added: “We see it as being the only option in the future – that will be the sea-change when it becomes a commercial reality. But there is still a long way to go.”