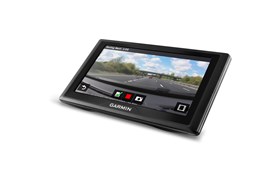 Garmin has launched a new range of 'Drive' sat-nav units that include hazard and distraction alerts for drivers.

The rainge includes warnings for upcoming sharp curves, railway or animal crossings, and alerts for users driving the wrong way on a one-way street.

In addition to the new driver awareness features, the devices include preloaded data from Foursquare POIs, adding millions of popular shops, restaurants and points of interest. All models offer free lifetime maps updates.

The DriveAssist model builds on the Garmin DriveSmart and includes a built-in dash cam to serve as an eyewitness. The device continually records, and automatically saves video footage on impact. The integrated camera brings in more advanced driver awareness alerts, such as the Forward Collision and Lane Departure Warnings

All Garmin Drive devices can be paired with the Garmin BC30 Wireless Backup Camera (sold separately) to easily see behind a vehicle when moving in reverse.