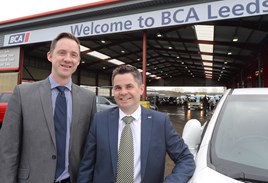 BCA Leeds officially opened for business on Monday, February 29, becoming the first of the former SMA centres to be rebranded as part of the expanded BCA network of 23 locations.

The centre staged a large dealer part-exchange auction on the Monday, with entries from Available Cars, Arnold Clark, JCT 600 and Lookers Group. This was followed by a Fleet sale on Tuesday, March 1, which featured a new sale section on behalf of BMW Group as well as the regular entries from Motability and Tusker.  BCA Leeds holds auctions five days a week, including a specialist LCV sale every Thursday.

“The opening sales were absolutely buzzing and it was noticeable that buyers on BCA Live Online were exceptionally active, accounting for significantly higher online activity than the centre had experienced previously.”

He added: “Buyers turned out in large numbers and the bidding was competitive throughout, generating high conversion rates and strong price performance.

“Congratulations to the team at BCA Leeds under manager Matt Gill who pulled out all the stops to ensure the official opening took place smoothly and so successfully.”