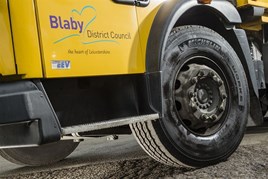 Blaby District Council in Leicestershire has switched to a Michelin tyre policy across its entire commercial vehicle fleet, after a test set of Michelin X Works tyres demonstrated longevity in a year-long trial.

Impressed with the test results, Blaby District Council now fits Michelin across most of the fleet, which includes a mix of 18 Mercedes-Benz and Dennis refuse collection vehicles (RCVs), a 12.5 tonne road sweeper, two 5.2 tonne Iveco Dailys and a single 7.5 tonne DAF 45, plus 30 light commercial vehicles. It is also specifying the tyres as original equipment.

Martin Bennett, servicing and fleet manager at the council, says: “Blaby is an area with a lot of narrow roads, meaning that a high proportion of our tyre costs come from repairs to sidewall damage or replacements from kerbing.

“We decided the best way to test Michelin’s tyres was to fit them to the RCV that had the highest rate of tyre damage – in this case having its tyres replaced sometimes every three to four months.

“I was really impressed by the tyres, and the results of the trial; in fact, it was 10 months before they needed turning on the rim and they lasted another 8 months, which was far better than the previous set of tyres on that RCV.”

Bennett is also Fleet Manager for Oadby and Wigston Borough Council, and after trialling the X Works fitments in Blaby District, changed the other fleets to a Michelin tyre policy.

He added: “The guarantee is one of the major benefits of specifying tyres from Michelin. It gives me peace of mind that if one of the tyres suffers accidental damage before the tyre is 50 per cent worn I can get a refund against the tyre’s remaining tread depth.

Blaby District Council’s RCVs operate up to seven hours a day, five days a week, collecting refuse from across the 50 square mile district, and delivering it to waste transfer stations.