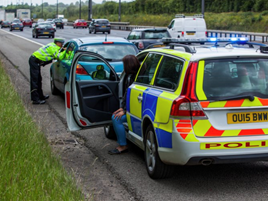 A year on from the first driver being prosecuted for middle-lane hogging, almost a third (32%) of motorists still admit to being a middle-lane hogger, according to new research from Confused.com.

New FOI police data requested by Confused.com reveals just 135 cases of middle-lane hogging have been recorded since spot fines were introduced by the government in 2013 to tackle “careless driving”.

A further look at the FOI data reveals the actual number of drivers caught middle-lane hogging could be much higher. “Careless driving” also includes the likes of tailgating, undertaking and driving too slowly - offences which are often a direct result of middle-lane hogging, even if they’re not recorded as such. In total, 1,158 drivers have fallen foul of “careless driving” spot fines.

However, of the 45 police constabularies that responded to the FOI request, only eightwere able to single out specific instances of middle-lane hogging among these other misdemeanours. This suggests a more consistent approach may be needed across forces nationally to help ensure that middle-lane hogging is being policed effectively.

Despite many drivers middle-lane hogging themselves, the practice is deemed ‘selfish’ by over half (51%) of other road users. An additional 48% believing lane hogging is a leading cause of increased traffic congestion. Meanwhile, over one in 10 drivers (11%) have experienced a vehicle collision or near miss on account of another road user hogging the middle lane. With this in mind, many drivers believe more needs to be done to make motorists aware of the rules of middle-lane hogging. For example, half (50%) believe motorway signs should be used to raise awareness of the dangers.

The research also shows that almost one in five (19%) drivers say they have never been taught about middle-lane hogging. This could help explain why half (50%) of motorists believe that some drivers aren’t even aware that they’re staying put in the middle lane in the first place. While, worryingly, almost two-fifths (37%) of UK drivers are unaware that middle-lane hogging is an offence punishable by at least three points on your licence and a £100 fine.