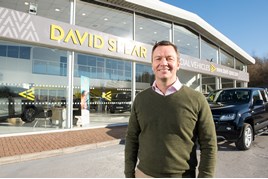 August has seen 15,619 new vans registered giving the LCV market an increase of 1.5%, according to SMMT results.

This slight increase in registrations comes after national growth of 1.1% was reported by the SMMT in July.

Lighter vans, in particular, have seen a huge resurgence with mid-range models weighing between 2.0 and 2.5 tonnes performing exceptionally well at plus 39.9%.

While demand is still easing in line with market forecasts, registration volumes remain higher than expected with continued stabilisation expected for the remainder of 2017.

The surge in 2.0-2.5t van registrations has also resulted in individual model successes with the Ford Transit Custom (31,868 registrations), Ford Transit (16,736) and Mercedes-Benz Sprinter (13,045) the best-selling models year to date.

Sales growth for David Spear (pictured) has hit 25% year-on-year, with the company’s expansion into Cardiff proving to be particularly successful.

“Unlike previous months, pickup registrations have grown by just 8.0% whilst 4x4s have seen their most dramatic decline year to date at -92.4%.”