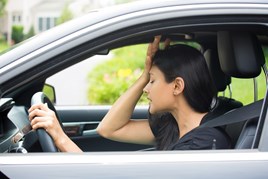 As traffic volumes on UK roads continue to rise at “unprecedented rates” 49% of motorists have considered changing their job to avoid it.

According to new research by Goodyear Tyres UK, the stress of getting stuck in traffic has a “profound impact on Brits’ wellbeing” with 4% admitting to breaking down in tears.

Of the 2,000 motorists asked (250 of which drive for business purposes), 40% would consider moving to a rural area or the suburbs to get away from city traffic.

Traffic jams caused 58% to be late for work and 9% say that congestion has caused them to be "the most stressed they have ever been in their lives".

It can also provoke an angry response with 37% claiming they have sworn and 15% admitting to making rude hand gestures out the window.

However, 28% say they use the time to sing in-car karaoke, 24% talk to friends and family via handsfree and 17% plan their meals for the week during a traffic jam.

Goodyear Tyres’ communication manager Kate Rock said: “With autonomous vehicles promising a future where passengers are free to maximise their travel time, it’s no surprise that Brits are willing to give up what can be a hectic city life in favour of a more relaxed commute.

“The incentives to live in the suburbs look set to increase and could have a significant impact on the make-up of our cities of the future.

“Our research reveals that almost one-in-five motorists believe the main benefit of using a driverless car would be the convenience of not having to park.

“Inadequate parking wastes a fifth of car spaces, so we could end up seeing cities with more parking space, relaxed commuters and as a result, greater levels of wellbeing, simply by taking the stress of parking and commuting away from drivers.”

TomTom has announced it is developing traffic technology to support autonomous driving and smarter mobility.