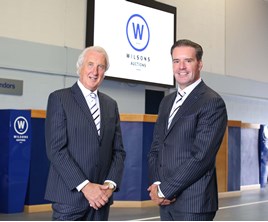 Wilsons Auctions has announced it is expanding its business with the purchase of Newport Auctions in South Wales.

The acquisition of the family-run business brings the total number of sites for Wilsons Auctions to 17 including nine branches and logistic and storage locations across the UK and Ireland.

The Newport site has been in business for 35 years and has grown to become one of the largest independent auction houses in Wales selling approximately 20,000 used vehicles annually. The acquisition will see the 30-strong workforce transition to Wilsons Auctions along with its weekly car and general goods auctions.

Wilsons Auctions Group operations director Peter Johnston said: “We are thrilled to announce we are adding another branch to Wilsons Auctions’ expanding map with the purchase of Newport Auctions. We felt it was a great opportunity to acquire this already established family business allowing us to expand our offering into the South Wales region and strengthening our position as the leading independent auction company within the British Isles.

“As a result of our law enforcement contracts, especially around the wider region of South Wales and the South West region of England, the Newport location, premises and staff will be in an excellent position to strengthen our current offering. As a result of our growth plans, we are confident there will be further expansion for the branch with additional auctions taking place and ultimately leading to further job opportunities,” he added.

The purchase of the Newport site comes 10 years after Wilsons Auctions first expanded its business into Wales with the acquisition of Queensferry. Since then the company has seen considerable growth within its business adding Newcastle and Maidstone to its portfolio in February 2016.

The company manages the asset realisation process for a number of government agencies including over 40 law enforcement agencies across the UK and Ireland.  Wilsons Auctions is proud to be responsible for returning in excess of £80 million back into the public purse through the role it plays in realising important assets.

Wilsons Auctions is investing £1 million in an extensive refurbishment of its Newcastle site.