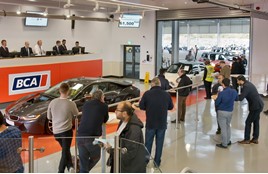 Used car values took an expected dip in July, as a result of the holiday period, but prices remain strong with year-on-year values rising by £501.

Stuart Pearson, BCA COO UK Remarketing, said: “It was no surprise that demand from professional buyers softened slightly as the hot weather and holiday season began, but overall market activity continued at very healthy levels in July.  Buyers focused more attention on cleaner vehicles that could be retailed more quickly, with poorly presented, damaged or incomplete examples needing to be sensibly valued to sell first time.”

“While fleet & lease values fell marginally, taken in the context that this was from record levels in June and we are in the peak holiday season, it demonstrates the strength in depth across the used car market.  Underlining this, dealer part-exchange stock posted the sixth consecutive month of record values at BCA and nearly-new values hit one of the highest points on record.”