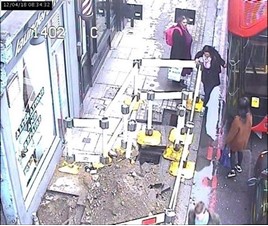 Transport for London (TfL) has successfully prosecuted Cadent Gas for a series of unsafe roadworks, with the utility company ordered to pay a fine of £40,000.

During their unsafe work, Cadent Gas failed to provide suitable alternative walkways when footpaths were closed, forcing people to walk out into the road, close to busy traffic.

Furthermore, it failed to use barrier systems at Kingsland Road and North Circular Road between April and June last year, which protect people walking and cycling from traffic.

The utility company, which runs the UK’s largest gas network, pleaded guilty to two offences of failing to provide adequate signing and guarding in the course of the works.

In addition to the £40,000 fine issued at the Westminster Magistrates’ court, Cadent was ordered to cover TfL’s costs of £11,909.

To help prevent unsafe roadworks in future, TfL has published a Temporary Traffic Management Handbook, giving all companies who want to do work on London’s roads clear guidance on how to keep people safe around roadworks.

Between 2005 and 2017, 99 people were killed or seriously injured near roadworks on the Transport for London Road Network (TLRN). This new safety guidance forms part of the Mayor and TfL’s Vision Zero ambition, to eliminate death and serious injury on London’s roads.

Glynn Barton, director of network management at TfL, said: “We have been working with Cadent since January 2017 to address ongoing problems and it is disappointing to see that streetworks are still happening with no safety measures in place for people walking and cycling.

“Hopefully this prosecution sends a strong message that we take streetwork violations seriously and will continue to prosecute any company that does not follow the rules.”

TfL has been working with utility companies, including Cadent, to address ongoing safety problems at their street work sites on roads managed by TfL. This work includes support and guidance from TfL on best practice and legal guidelines on how, as well as regular meetings, performance data and targets.

TfL also gives advice on how to keep all road users safe during work and analyses the common inspection failures found at Cadent’s sites.

TfL’s Lane Rental Scheme charges organisations who carry out roadworks to ‘rent road space’ on TfL’s roads. TfL reinvests this money into funding improvements to the road network to reduce disruption and other adverse effects caused by roadworks.

Since Lane Rental was introduced in 2012, there has been a 194% increase in companies working at the same site, at the same time and a 31% rise in planned utility works at night.

Without the scheme, the extra disruption would have cost approximately £95m in lost travel time, says TfL.

Around 65 schemes, such as mapping below-ground utility services, robotic technology and training to promote efficiency in on-site working practices have already received a share of almost £17m in Lane Rental funding.

TfL has published its draft budget for 2018/19, describing the transport improvements that will be delivered in the first year of its five-year business plan.