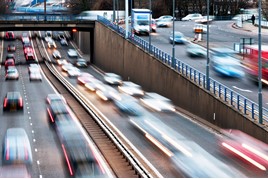 The Welsh Government’s decision to reject plans for an M4 relief road will cost the country’s economy hundreds of millions of pounds in lost investment, according to the FTA.

The £1.6 billion scheme would have seen a 14-mile motorway built as a gateway into south Wales in an attempt to tackle the congestion faced by motorists around Newport.

A planning inspector who oversaw a public inquiry into the scheme described then case for the road had been “compelling”, but it has been axed by First Minister Mark Drakeford because of its cost and impact on the environment.

However, the FTA is frustrated by the decision. Sally Gilson, head of Welsh policy at FTA, said: “As the organisation representing the UK’s logistics sector, FTA is urging the First Minister to reconsider his decision; the construction of a ‘Black Route’ is the only option for the Welsh economy and its citizens.

“The M4 is a vital stretch of infrastructure with international economic importance, yet it is blighted by heavy congestion.

“FTA’s members have consistently evidenced the urgent need to tackle these congestion issues; it is frustrating that the opportunity to deliver this essential investment into South Wales’ infrastructure has been missed.”

She added: “The First Minister’s decision will cost the Welsh economy hundreds of millions of pounds in lost private sector investment; as per the Welsh Government’s own assessment, it would have delivered £2 for every £1 invested.

“By improving the air quality around the Brynglas tunnels and tackling the road congestion through Newport, it would have also benefited local citizens.”

Announcing his decision, Drakeford said: “This is a decision being made at the point of maximum uncertainty about our financial future.

“Unprecedented austerity in the public finances is combined with a complete lack of clarity over our capital budgets for the coming years, and is exacerbated by the uncertainty surrounding Brexit, while we know that the UK Government’s lack of progress in bringing forward a comprehensive spending review could see the Welsh Government’s budget even lower in the future than it is today.

A commission will new look at alternative solutions to the problem of congestion on the M4 in Newport.